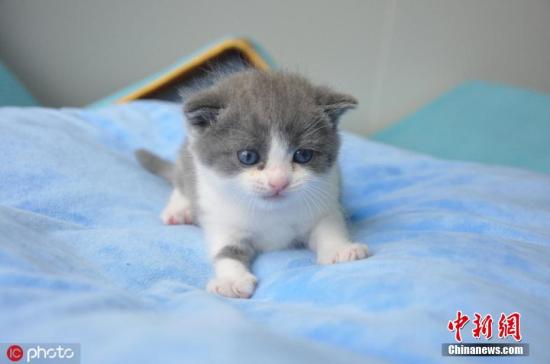 As the owner of China's first cloned cat, all Huang Yu, a 23-year-old man from East China's Zhejiang Province, wants is the "same company" of his beloved Garlic.

Huang had raised Garlic since October 2016 and brought the cat with him when he went to start his own business in Shenzhen. The two then went back to Wenzhou. Unfortunately, Garlic died in January from a disease.

Tortured by the belief that it was his neglect that resulted in Garlic's death, Huang decided to bring his pet back after hearing on the news that dogs had been cloned.

On January 9, the night Garlic died, Huang called the Sinogene Biotechnology Co, which came to collect subcutaneous tissue from Garlic's leg and kept it in liquid nitrogen.

"I weighed up the pros and cons of cloning, and concluded there are more benefits," Huang told the Global Times.

He noted that the cost of getting Garlic cloned was "not too much" for his family.

The project to bring Garlic "back" started on March 10, and on July 21, a new cloned Garlic was born. The process was not easy: four cats had been found to carry the surrogacy before the last one succeeded.

Huang said that he heard the news that the new Garlic had gone through the danger period and was growing healthily on July 24, which "is like a dream for me."

On August 19, the company declared to the public that China's first cloned cat was born. The kitten was delivered to Huang on September 20 from Beijing to Wenzhou.

While waiting for the newborn Garlic, Huang began reflecting on his decision and believed he had been impulsive in going through with the process. He said that he used to think the new cat would look exactly the same as Garlic, but it turned out that the newborn cat did not have any grey in its chin like Garlic did.

"In the contract, the written clause says the company is responsible for making sure the clone is 99 percent similar, but there was no statement about the appearance. I should have checked more thoroughly," Huang said.

Talking about the difference in appearance between the two cats, Lai Liangxue, Sinogene Biotechnology Co's chief scientist and a research fellow at the Chinese Academy of Sciences, told the Global Times, "The uncertainty is different case by case, and depends on the state of the original animal when the cells are collected, the seasons, and the age of the original. The younger the animal, the better the quality of the gene sample."

When asked if he would choose to get Garlic cloned if he could take the decision again, Huang confessed that he wouldn't.

"Time has somehow healed my sorrow of losing Garlic. I just could not accept the fact that Garlic was gone. I could not let go and just did something impulsive," he said.

After the cloned Garlic drew widespread attention on Chinese social media, Huang opened an account on Sina Weibo and posted video clips of the new Garlic as well as pictures of the deceased original.

"After bringing Garlic home, I think I will raise it the way I raised Garlic," Huang said.

Huang is not the only person who has decided to bring their pet back through clone technology.

Hui told the Global Times that she borrowed 250,000 yuan from her parents and used 130,000 yuan of her and her husband's savings from the past four to five years.

The cloned dog is expected to be born around September 16. Teemo will also be cloned by Sinogene.

Lai told the Global Times that after the US and South Korea, China has become the third country to be able to clone dogs and cats. Within three to five years, the market price could be halved.

Meanwhile, ethical questions over clone technology continue to be raised. Sinogene wrote in an article released on the company's WeChat public account that the company "will never try any gene editing on human embryos without rigid ethical and security reviews as well as abundant data from experiments."

Wen Jun, a professor from East China Normal University, was quoted by Beijing Youth Daily as saying that cloned pets are necessary when some patients need their pets to get them through the last phase of their lives.

But it is unnecessary when pet owners only want to be relieved from sorrow after their pets die, as the newborn cloned animals do not have the previous ones' memories and overuse of clone technology may affect the laws of nature.