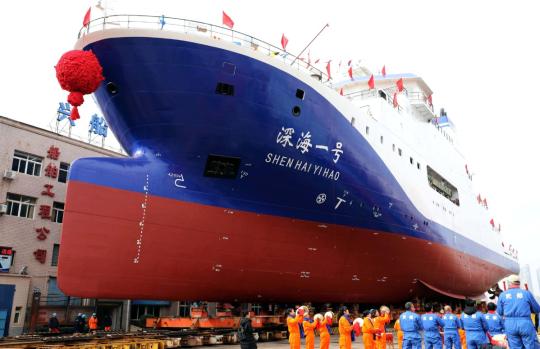 Chinese engineers say the world's most advanced mother ship for manned submersibles will go into operation soon, marking the latest step in the country's efforts to become a major power in deep-sea exploration.

The Deep Sea 1 will enter service in the first half of 2019 and along with China's manned submersible Jiaolong will make a global deep-sea scientific voyage, the first of its kind by China, starting in 2020, according to China Ocean Mineral Resources Research and Development Association, operator of the ship.

The new vessel will become the country's first dedicated mother ship for submersibles and will service the nation's major deep-sea submersibles, including the manned Jiaolong and the robotic Hailong series, the association said in a statement.

It was moved into water on Saturday at Wuchang Shipbuilding Industry Group in Wuhan, Hubei province, which means the construction will soon come to an end and sea trials will begin.

He said that the ship will be able to sail more than 22,000 kilometers in a single mission and sustain a 60-day operation in any area of ocean.

The vessel will feature better technological and scientific capabilities than the four other dedicated submersible mother ships around the globe, Zhang said. It will have larger laboratories and submersible-support areas, the latest information capacities, stronger oceanographic investigation equipment, more environmental protection measures as well as being quieter.

Named after a mythical dragon, Jiaolong is China's first manned deep-sea research submersible. It reached its greatest depth, 7,062 meters, in the Mariana Trench in June 2012. Previously, Jiaolong was based on Xiangyanghong 09, a survey vessel in service since 1978.

The last time Jiaolong and Xiangyanghong 09 were used together was in 2017 when they conducted a 138-day expedition that started in February and concluded in June.

After the trip, Xiangyanghong 09 was relieved of its role as the mother ship of Jiaolong, which is now undergoing a technical upgrade at its base in Qingdao, Shandong province, for the prospective global mission in 2020.

China has been focusing on deep-sea exploration and has allocated considerable resources in the research and development of advanced submersibles. The nation has two manned deep-sea submersibles, Jiaolong and Shenhai Yongshi, and several robotic models, including the Qianlong and Hailong series.