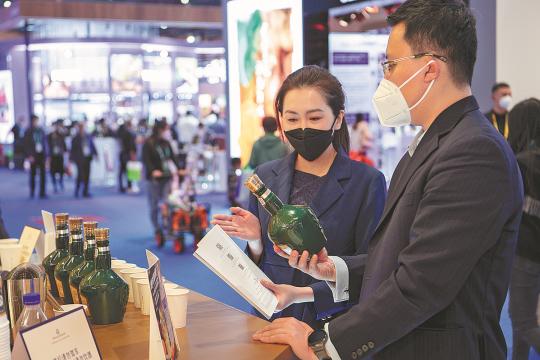 A sales representative (left) from Pernod Ricard introduces products to a visitor at its booth during the fifth China International Import Expo in Shanghai on Nov 7. (Photo/CHINA DAILY)

"The CIIE remains a vital platform for domestic and international circulation. It serves as a high-level launchpad for foreign companies to bring in innovations," said Jerome Cottin-Bizonne, managing director for China at Pernod Ricard, a French wine and spirits group.

As the CIIE also helps boost domestic consumption by connecting overseas and domestic markets, benefiting the further recovery of global demand, Cottin-Bizonne said Pernod Ricard will further enrich its product portfolio and push both online and offline sales in China to seize more market share in the years ahead.

Pernod Ricard has participated in the CIIE for five years in a row and introduced a number of new products to China via this unique platform.

After putting its first China-based malt whisky distillery into operation at Emei Mountain, Sichuan province, a year ago, Cottin-Bizonne said Pernod Ricard will continue to explore new paths for investment and development in the country.

Through its venture arm Convivialite Ventures LLC, Pernod Ricard has established close collaborations with numerous startups with considerable potential and supports their growth in China. Its diversified investments include those in emerging industries such as food and beverage business-to-business e-commerce, chocolates, alcohol new retail, robotics and fitness service platforms.

"These moves are designed to join hands with cross-industry partners, while also contributing to developing a prosperous ecosystem in the Chinese market," he said.

"One of the most important measures is digitalization. The company needs to build the whole ecological chain through digital tools and technologies," he added.

The digital economy mainly entails business resulting from the digital transformation of traditional economic activities powered by the internet, electronic means and data, according to information released by the Beijing-based Chinese Academy of International Trade and Economic Cooperation, a government think tank.

After two years of efforts, the Paris-based group is currently partnering with over 200 wholesalers and over 4,000 retailers digitally across China.

Supported by 19,480 employees, Pernod Ricard is the world's second-largest producer of wine and spirits, including Chivas Regal, Royal Salute and Martell Cognac. Its consolidated sales stood at 10.7 billion euros ($11.11 billion) in its 2022 fiscal year.

Thanks to China's growing trend toward premium products, its sales revenue in the country grew by 9 percent on a yearly basis in the first quarter of its 2023 fiscal year.

Government officials and experts said that as the first major international expo held in China since the 20th National Congress of the Communist Party of China, the fifth CIIE once again demonstrates that China is committed to its fundamental national policy of opening to the outside world and pursuing a mutually beneficial strategy of opening-up.

"For five years, the CIIE has not only served as the optimal choice for multinational companies to make global debuts of their new products and frontier technologies, but also witnessed many participants transition from exhibitors to investors," said Sheng Qiuping, vice-minister of commerce.

The transition has also reflected the rising appeal of the Chinese market. Foreign companies are investing in China mainly due to its market potential, expanding domestic demand, the country's strong economic resilience and dedication to continued opening-up, said Yang Changyong, a researcher at the Academy of Macroeconomic Research at the National Development and Reform Commission.

Once the transition is consolidated, foreign companies will come with more trade and investment demand. It will better enable China in reinforcing its economic and trade ties with other economies via the CIIE, he said.

Xu Mingqi, a researcher with the Shanghai Academy of Social Sciences, said these facts show that the majority of global companies' decisions for investment and product debuts are based on market conditions and growth potential, and they are acutely aware that no single economy can independently provide all the resources and ideas of innovation for producers or offer all the needed goods and services to consumers.