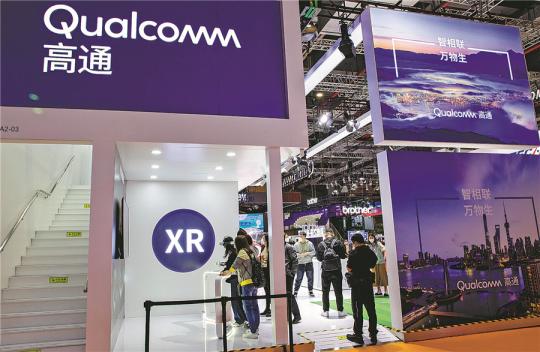 The booth of Qualcomm at the fifth CIIE in Shanghai. (Photo/China Daily)

IC companies from the United States, Japan, the Netherlands, South Korea and other countries set up large booths at the CIIE that concluded in Shanghai on Thursday.

Their large-scale participation reflects their enthusiasm to tap into the world's largest semiconductor market, experts said.

Shen Bo, senior vice-president of Dutch semiconductor equipment company ASML and president of ASML China, said, "This is the fourth time ASML has participated in the CIIE, and we hope to leverage the platform to continuously demonstrate our openness and collaboration."

Currently, ASML has 15 offices, 11 warehousing and logistics centers, three development centers, one training center and one maintenance center in the Chinese mainland, where more than 1,500 local employees run the operations.

China will continue to play an integral role in driving the development of a highly collaborative global semiconductor industry, ASML said.

Texas Instruments, a U.S. chip company, has utilized the CIIE to announce its expansion in China. TI is expanding its assembly and test capacity in Chengdu, Sichuan province, and effecting automation upgrades to its Shanghai product distribution center.

Jiang Han, vice-president of TI and president of TI China, said: "We are excited to offer our customers stronger local support, address their needs quickly and efficiently, and help them succeed. The expansion … further underscores our deep commitment to supporting our customers in China."

At the CIIE, TI showcased how its analog and embedded processing products and technologies are helping manufacturers drive innovation in green grids, electric vehicles and robotics systems.

Another U.S. chipmaker, Intel, also found the CIIE useful. Wang Rui, senior vice-president of Intel, said, "Intel is very pleased to participate in the expo, which is an important platform to promote international exchange, and comes with huge opportunities for global cooperation."

Having been deeply involved in the Chinese market for 37 years, the U.S. company regards the country as one of the top priorities of its global strategy, Wang said.

"In 2022, Qualcomm's participation has once again shown its confidence in the long-term sustainability of the Chinese market and the determination to work with Chinese partners to develop domestic and international markets and drive win-win development," Meng said.

The global chip companies' enthusiasm about China stands in sharp contrast to the U.S. government's attitude, as seen in a series of well-calculated restrictions or controls imposed on the export of advanced semiconductor technology to Chinese tech companies.

China's Foreign Ministry spokesman Zhao Lijian said at a news conference on Thursday: "China will continue to work with the international community to jointly oppose economic coercion and technological bullying, and jointly safeguard the stability of the world economic system and rules, and the security of the global industrial chains and supply chains.

"We will take the CIIE as an opportunity to continue opening the door to facilitate the investment and business of enterprises from all countries in China, and work together to build a more united and prosperous future."