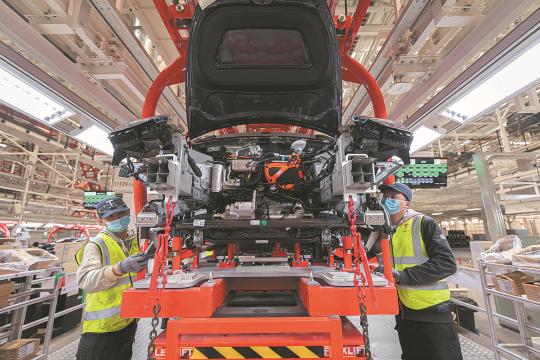 "The Q3 production rate in Shanghai surpassed previous quarterly records," the carmaker said in its quarterly update released on Thursday, adding it is "supplying vehicles to most markets outside of North America".

Statistics showed more than 483,000 Model 3 sedans and Model Y SUVs rolled off the assembly line in Shanghai in the first three quarters, almost equal to its total deliveries in 2021.

The Shanghai plant, Tesla's first overseas manufacturing facility, is also its largest. It is capable of producing more than 750,000 vehicles a year.

Tesla saw its 1 millionth China-made vehicle roll out its Shanghai plant in August. It said more than 95 percent of Shanghai-made Tesla vehicle parts are purchased in China and almost all employees at the plant are Chinese.

Statistics from the China Passenger Car Association showed that in the first half, Tesla exported 97,182 Shanghai-made vehicles, accounting for 48 percent of the total vehicle exports from China.

It sold 318,200 vehicles in the country from January to September, ranking the third in China after BYD and the Sino-US joint venture SAIC-GM-Wuling, according to the CPCA.

Globally, Tesla delivered 343,830 units in the third quarter, bringing its total deliveries from January to September to 908,573 units.

Its revenue for the third quarter stood at $21.45 billion, up 56 percent year-on-year, while its operating income reached $3.7 billion, which resulted in a 17.2 percent operating margin.

Tesla said one of its top current priorities is to scale up production at its plants across the globe as it anticipates rapid growth in customer demand.

"We, to the best of our knowledge, believe that Tesla will continue to grow deliveries and revenue production at a 50 percent or greater compound annual growth rate," said Tesla CEO Elon Musk.

The carmaker said it will increase vehicle production "as quickly as possible" by upping the production rate in Shanghai and Fremont, while boosting production in Berlin and Texas.

It said logistics volatility and supply chain bottlenecks remain immediate challenges, although the situation is getting better. In the long run, battery supplies will be the main limiting factor to the market's growth, it said.

As for the company's future products, Tesla said it expects to roll out its Semi truck to Pepsi in December and will begin producing its Cybertruck in Texas after ramping up its Model Y production.