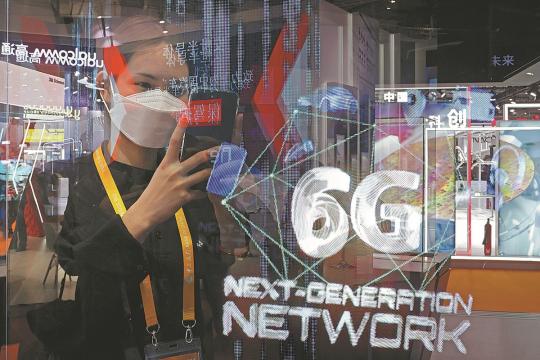 6G tech is promoted during an expo in Shanghai. (YIN LIQIN/CHINA NEWS SERVICE)

Shanghai plans to build itself into an innovative center of industries of the future and guide the sector's output value to 500 billion yuan ($69.7 billion) by 2030, the municipal government announced on Tuesday.

According to an action plan published on the website of Shanghai municipal government on Tuesday, future-oriented industrial clusters will be developed in Shanghai, and by the year 2030, their scale will reach about 500 billion yuan in output value.

To ensure a greater role for manufacturing in its real economy's development, Shanghai aims to establish a new industrial system led by three leading industries, supported by six key industries, and enhanced by emerging industries and future-oriented industries, said Wu Jincheng, director of the Shanghai Commission of Economy and Informatization, at a news conference in September.

To reach the projected scenario, future-oriented industrial research institutes will be established, about five technical colleges will be built, and some 15 industrial innovation centers will be developed, which will enable the city to achieve core technology independence ranging from basic research and fundamental applications to industrialization, the plan stated.

A business model for the future that allows enterprises of various sizes to integrate and innovate will be created. And the city will promote the development of 10 industry-leading corporations, 20 environmentally friendly companies, some 100 technology centers, and about 1,000 high-tech enterprises.

The city also looks to build an open and inclusive ecosystem for the future consisting of high-level strategic scientists and entrepreneurs, and some 50 comprehensive application scenarios, the plan stated.

China's constantly improving technological standards, its strengthened industrial development capability and its comprehensive industrial system have all laid a solid foundation for the development of future-oriented industries, analysts said.

Many of the strategic emerging industries have high value-added elements, and are highly competitive around the world. The creation of a favorable, pro-development environment with lower costs and top-end talent will enable enterprises to seize the opportunities to grow, said Shi Yizhe, an expert in industrial development research, in an interview with the Securities Times.