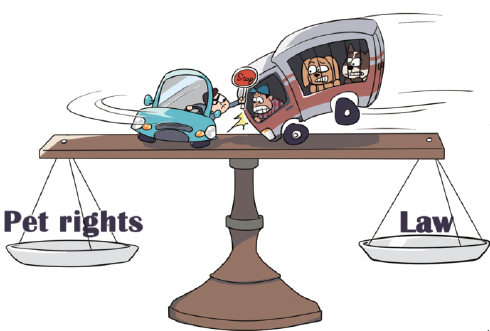 The attempt of some dog lovers to rescue 320 dogs by forcibly stopping the truck carrying them on an expressway in North China's Hebei province and thus causing a massive traffic jam has sparked a heated public debate. Despite their good intention of saving the dogs, the dog lovers' action seriously endangered public safety and has been severely criticized by netizens.

According to the announcement made by traffic police of Langfang, Hebei, on its official microblog site, on Saturday a truck carrying 320 dogs from Central China's Henan province to Northeast China's Jilin province was forcibly stopped on the highway by three vehicles driven by the dog lovers. The two parties came to blows and even defied the traffic police's order, causing the massive traffic jam on the highway.

This is not the first time dog lovers in China have used extreme or violent means to save dogs. Even on some previous occasions, they have forcibly stopped trucks carrying dogs on highways.

As pets, dogs are loved by many Chinese people with many regarding them as members of their families. Support for animal rights and animal protection is increasing in China, and the public respects dog lovers' feelings and many of their appeals.

The problem is that the Law of Protection of Wildlife provides protection to only wild animals, which means dogs, as common pets, are not protected by the law in China. And that is the reason why we see so many conflicts between dog lovers and other people.

But there can be no justification for dog lovers to use extreme and violent means, especially violating the Law on Road Traffic Safety and endangering other people's lives.

The use of extreme means by dog lovers reflects two major problems with safeguarding individual rights. The first is the assumption that personal interests and rights are above all other established norms and laws.

Dog lovers' feelings are understandable, but their extreme behavior causing harm to others, for example, stopping vehicles on a highway should not be condoned because it endangers not only their own lives but also those of others. How can dog lovers assume that dogs' safety is more valuable than people's safety?

Moreover, if dog lovers' extreme actions on highways cause any traffic accidents and result in human casualties, they should bear legal responsibility. They should know that personal interests and rights can be protected and respected only under the legal framework, which does not allow them to violate other people's rights and interests.

The second problem is ignoring procedural justice. Many people pursue so-called justice in a way that violates the law, which cannot be tolerated.

The lack of a specific dog protection regulation in China makes it difficult for dog lovers to provide full protection to their pets through legal means. So instead of resorting to extreme means to achieve their goals, dog lovers should appeal to the legislation to enact a specific law on domestic animals, because efforts to stop a truck carrying dogs, even if successful, can only save a limited number of dogs, but a sound law on domestic animal protection will not only protect all dogs but also save other animals from being abused or slaughtered.

To succeed, animal protection work requires wide public support. But the illegal methods used by dog lovers to save dogs actually tarnish their public image, and therefore they lose public support to achieve their final goal.

Ignoring procedural justice to achieve personal goals is not the correct way to deal with a problem in modern society ruled by law. "Doing the right thing" is important, but it is also important to "do things right".

The author is a writer with China Daily.