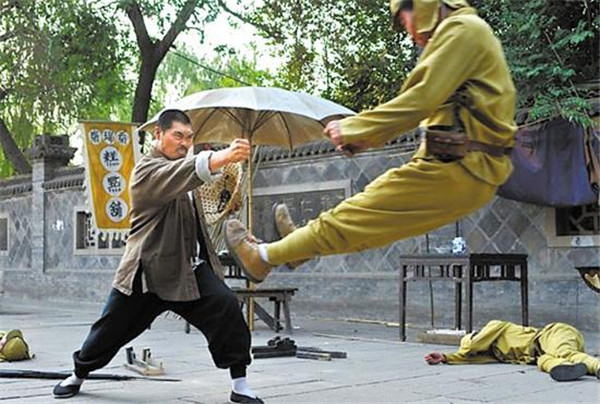 A scene from a TV series that shows a Chinese man repelling a Japanese soldier with his fist. (Photo/CRI)

Are you tired of exaggerated Hollywood action movies that defy common sense? But once you watch some Chinese dramas on the war against Japanese invasion and occupation in the 1930s and 1940s, you will realize the Hollywood flicks are much better.

In one such Chinese drama, a sniper shoots an enemy soldier 400 kilometers away, while in another Chinese fighters are shown destroying an aircraft by throwing grenades in the sky and shooting them with rifles to cause an explosion. As if these were not enough, in another drama a naked girl is shown waving goodbye to an entire battalion of Chinese fighters. The least said the better about the depiction of "foolish Japs", because all such dramas have at least one or two of them.

But hopefully, such absurd dramas will no longer be approved, for Tian Jin, deputy-director of the State Administration of Press, Publication, Radio, Film and Television, said recently that TV programs and films on the war against Japanese aggression might not be approved if they have such contents.

The War of Chinese People's Resistance Against Japanese Aggression (1937-45) was bloody and extracted great sacrifice from the Chinese people and army. By distorting this part of history, the TV dramas and films are not only belittling Chinese people's sacrifice, but also insulting their martyrdom.

Those who make such dramas say TV programs and films need not necessarily depict history; artistic rendition is necessary to tell good, historical stories. But the fact is that the makers of such dramas cannot (or do not) distinguish between "fiction" and "distortion". Fiction is rational imagination based on truth - it respects truth - while distortion means fabricating facts.

Such distorted dramas, even if they declare "fiction, not history", can distort a nation's popular history. Since films and TV series are more popular than history textbooks, some viewers could mistake them for the truth and would never try to find out what the real history is. And children and youths, who easily believe what they are told, will end up having the wrong idea of history.

If the distorted dramas keep dominating TV channels, an entire generation will not know how cruel the war against Japanese aggression was. Thus, it is necessary to stop such dramas from continuing to distort history and, for that, we need to find out why they are made in the first place. The answer is: entertainment. The market-oriented reform has led to competition among film and TV series directors for viewers' ratings, and to get high ratings they could break any rule.

Worse, the dramas have a huge demand because they meet the taste of some people. Given the fast pace of life today, people in general don't want to wrack their brains while watching TV programs or films. And when it comes to the war against the Japanese invaders, the distorted dramas also help Chinese viewers to vent their anger and hatred against the Japanese invaders.

Entertainment is not a bad thing, but an entertainment program that distorts the bloody history of a country can never be good.

Let us hope the State Administration of Press, Publication, Radio, Film and Television will, as it has said, end the trend of such dramas. But that would still not be enough, for good films and TV series have to meet the demand of the audience in order to drive out the bad ones. That will in turn require the entire TV drama industry to change its tack and come up with better productions.

Chen Xuguang, the author, is a senior researcher at and director of the Center of Film, TV and Play Research Center, Peking University. The article is an excerpt from his interview with China Daily's Zhang Zhouxiang.