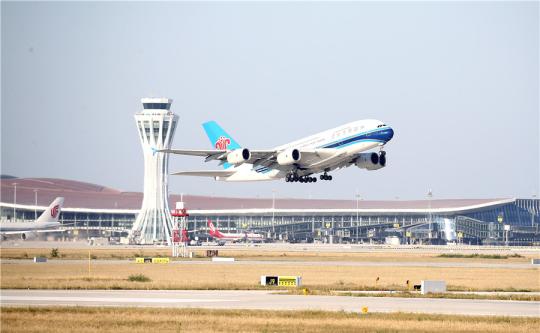 Beijing Daxing International Airport's first flight, a China Southern Airlines' A380, takes off as the airport opens to traffic on Sept 25, 2019. (Photo by Zou Hong/China Daily)

Beginning on Sunday, 15 airlines - seven domestic and eight foreign - will start operating from Beijing Daxing International Airport, according to the airport authority.

China Eastern will transfer 10 percent of its current flights from the Beijing Capital airport, with international flights accounting for no less than 10 percent of that.

On Sunday, the company will open a route from Beijing to Fukuoka, Japan, the first international flight since the airport started operations on Sept 25.

China Southern is moving its southbound flights to the new airport, and all of its flights will be moved to Daxing by March 2021. Moreover, Air China will begin to operate its Bangkok-bound flight and 10 domestic flights at Daxing airport.

In addition, British Airways, Malaysia Airlines, Royal Brunei Airlines, Royal Air Maroc, Himalaya Airlines and iFly Airlines will move all their operations from the capital airport to Daxing airport, while Polish Airlines and Finnair will have a presence in both Daxing Airport and Beijing Capital International Airport.

Once the flight transfers are complete, the 15 airlines will operate 119 routes from the new airport, consisting of 104 domestic and 15 international routes to 118 destinations.

With many airlines transferring flights to Daxing airport and operating in both airports after Oct 27, it is important for passengers to ensure they are headed to the right airport.

For those passengers who have been transferred to Daxing airport after buying flights out of the capital airport, China Eastern and Capital Airlines will inform them by phone and text messages of the changes.

If they still go to the wrong airport, China Eastern said it will allow passengers whose flights are dated between Oct 27 and Nov 26, and between March 29 and April 28-when the airline will be transferring more flights-to reschedule their flights for free or get full refunds.

The 41.4-kilometer subway connecting Caoqiao subway station in Fengtai district with Daxing airport also went into operation on the opening day of the airport.