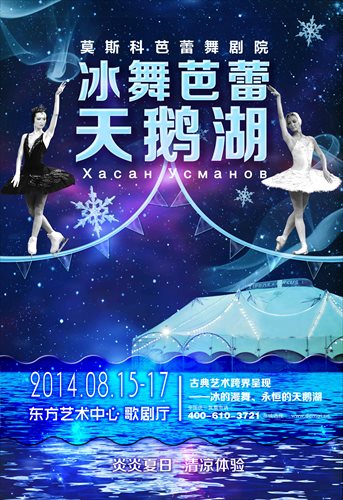 A poster for the upcoming ice ballet Swan Lake

The Classical Russian Ballet of Moscow will kick off a nationwide tour of China with its signature ice ballet Swan Lake. This production of Tchaikovsky's masterpiece will feature contemporary ice dancing maneuvers artfully combined with ballet to retell the timeless story of Prince Siegfried and swan queen Odette.

"The exhilarating new adaptation becomes a contemporary, modern-day dance drama with a new interpretation of the classics, which is quite different from traditional renditions and well-worth watching," a representative for event organizer Damai.cn told the Global Times.

"Connecting the three absolutely different kinds of art - classical ballet, figure skating and circus arts - seemed impossible, but all together we did it," said Hassan Usmanov, artistic director and principal dancer of Classical Russian Ballet. "The audience will fall into a wonderful world where classical ballet goes into incredible stunts on the ice."

The stage will be divided into two parts, the ballet stage at the front and the skating section at the back. In the second half of the show, ballerinas in black skirts will glide swiftly on the ice stage in visually stunning ice dances.

The aim is for the ballet and the ice skating scenes to seamlessly merge.

As Usmanov noted, "ballet scenes will smoothly and imperceptibly pass into figure skating and vice versa. They supplement each other."

According to Usmanov, the most difficult and dangerous part of this production is performing acrobatics on ice, including hula hooping and rope skipping. To accomplish such feats, dancers were required to not only master the basic ballet techniques like swift pirouette, soft plie and high air jumps, but also have a good sense of balance and coordination for the ice skating.

The troupe will also add the Chinese folk stunt of diabolo juggling (spinning two cups around an axle attached to two sticks) for the first time.

"Our directors, choreographers and coaches take the best and the most interesting parts from the mixture of world cultures to create the performance. We have included many elements borrowed from Chinese acrobatics and circus for the China tour because we think it will be great fun for the Chinese audience," Usmanov said.

The production has a cast of professional dancers who are graduates of prestigious ballet schools, including the Moscow Academy of Ballet, the Vaganova Ballet Academy of St. Petersburg, the Russian State Ballet Theatre, the Nureev Ballet Academy, the Novosibirsk Ballet School and the Russian Academy of Theatre Arts.

"Our performances are by professional ballet dancers, figure skating masters and highly skilled circus artists from the best circuses in Moscow," Usmanov said.

Established in 2004, Classical Russian Ballet has achieved success with its tours of Russia and many other countries, including Finland, Japan, Spain, Iran, Australia and Germany. Most of the ice dancers have also earned the honorary title of Master of Sports in Russia.

In the new production, the male lead will be Alexander Butimovich, laureate of the theatrical Russian prize Nizhegorodsky Perl in 2001, laureate of the IX International Contest of Ballet Dancers and Choreographers in Moscow and the prize winner of the Hope of the World Ballet in 2001.

The show will also be staged in Beijing, Guangzhou and Hangzhou. Visit en.damai.cn/event/tickets_67121/ for detailed information.