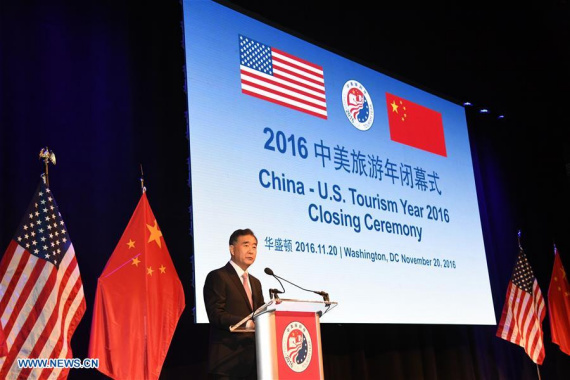 China-U.S. Tourism Year 2016 came to the end on Sunday, with officials from both countries pledging to expand tourism cooperation and enhance friendship.

"Thanks to joint efforts, the Tourism Year has been marked with colorful and fruitful events, which have helped expand our people-to-people exchanges and practical cooperation in various areas, and injected new impetus to China-U.S. relations," Xi said in a written message to the closing ceremony of the China-U.S. Tourism Year 2016 held in Washington.

He urged the two sides to build on the success of the Tourism Year to sustain the momentum of people-to-people and cultural exchanges, enhance mutual understanding and friendship, and reinforce the social foundation for the development of China-U.S. relations.

"The growth of China-U.S. relations requires the participation and support of our peoples," he said.

The China-U.S. Tourism Year was an outcome of Xi's state visit to the United States in September 2015. Xi said he and U.S. President Barack Obama made the decision with a view to promoting the building of a new model of major-country relationship, and carrying forward practical cooperation and enhancing friendship between the two countries.

Chinese Vice Premier Wang Yang said at the closing ceremony that the two sides have organized a series of cultural and people-to-people exchanges this year to boost tourism in the two countries and made the peoples of both countries enjoy the fun of tourism.

"The two-way tourist flow between the United States and China is expected to top 5 million this year," Wang said, adding that tourism cooperation "has injected strong impetus" to the two economies.

Citing U.S. official statistics, Wang said that about 2.59 million Chinese traveled to the United States last year and spent 30.1 billion U.S. dollars in total while in the country.

"The number of Chinese tourists going to the United States this year is expected to surpass 3 million, and they'll create 45,000 direct jobs and 230,000 indirect jobs for the United Sates," he noted.

As both China and the United States are countries with large tourism resources and markets, Wang said China stands ready to work with the United States to simplify visa policies and provide more convenient, comfortable and secure services for tourists.

The two sides will also lower the entry threshold for investment in the tourism industry, and encourage companies from both countries to expand investment cooperation, the Chinese vice premier said.

U.S. Secretary of Commerce Penny Pritzker, who made her first trip to China in 1984, said at the closing ceremony that tourism between the two countries has seen significant progress over the past decade, yet there's still much room to grow.

"The United States only captures 2 percent of the outbound Chinese market despite strong demand from Chinese visitors to our shores," she said.

The U.S. government is taking advantage of the China-U.S. Tourism Year and improving tourism operations to draw more Chinese visitors to the country, she said.

As China is developing its own national park system, it's working with the U.S. National Park Service to learn its best practices, models and lessons, Pritzker said.

"As we close the Tourism Year and look to the future, I want to assure all of you that we will continue to promote more traveling and tourism between our two nations," she said.