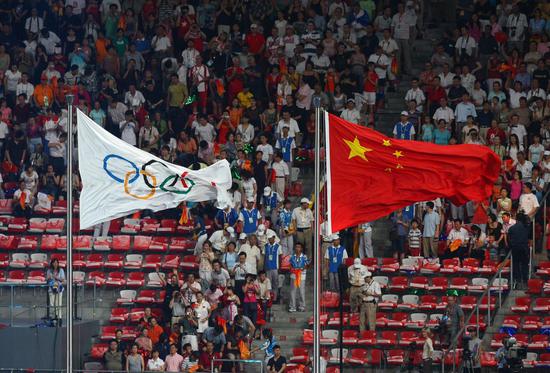 The national flag of China is hoisted at the Beijing 2008 Olympic Games closing ceremony held in the National Stadium in Beijing, China, Aug. 24, 2008. (Xinhua/Xing Guangli)

With 10 days to go before the 32nd Olympic Games open in Tokyo, China's elite athletes are making their final pushes toward the delayed sporting extravaganza.

Exactly 20 years ago, hundreds of millions of Chinese reveled in Beijing's successful bid for the 2008 Olympic Games, the first to be held in the world's most populous nation and the first in an Asian city since Seoul staged the 1988 Games.

As much of the world is still grappling with the COVID-19 pandemic, the Olympic flame symbolizes a light at the end of the dark tunnel for the Olympic family and the world as a whole.

For the Chinese, the Olympics represented a century-old dream which reached its climax 13 years ago when they staged a Games described as "truly exceptional" by then-International Olympic Committee (IOC) President Jacques Rogge.

But China's Olympic dream didn't stop in 2008. The country continues to contribute to the Olympic movement.

The first two questions found their answers not very long afterwards while the final puzzle was only solved almost a century after it was made.

At the Amsterdam Olympic Games in 1928, Song Ruhai, an observer from the All-China Sports Promotion Association, was the first Chinese to hear the word "Olympiad". He thus transliterated the word as "Wo Neng Bi Ya," which means "I can compete" in English.

Four years later, Liu Changchun was the first Chinese to make "Wo Neng Bi Ya" a reality. After 28 days of travel, the student from Northeast University arrived at the Los Angeles Games but found himself eliminated in the men's 100m preliminaries. In 1936, some 140 Chinese athletes participated in the Berlin Games.

In 1952, China dispatched a 40-member delegation to the Finnish capital of Helsinki to participate in the 15th Olympic Summer Games, marking the first time that the national flag of the People's Republic of China was raised at the quadrennial sports event.

It was not until the year 1984 that China made a significant impression at an Olympic Games, 52 years after Liu Changchun first took part. Chinese sharpshooter Xu Haifeng won the country's first-ever Olympic gold medal, and the Chinese team grabbed a total of 15 golds.

However, the search for an answer to the third question was painstaking. China failed in its first Olympic bid in 1993 and came back for its second try eight years later.

On July 13, 2001, then-IOC president Juan Antonio Samaranch announced during IOC's 112th session in Moscow that Beijing was awarded the 2008 Olympic Games, igniting the Chinese people's enormous enthusiasm for the Olympic movement and pride in their motherland's achievements.

"In the old days, Chinese people dared not imagine that this country could host the Olympic Games. It has become a reality along with the escalation of our country's status in the international community and our economic development. Beijing's success is a grand victory of our Party, our country and our people," said renowned Chinese basketball coach Mou Zuoyun after Beijing won the bid.

Mou had wanted to watch the Beijing Olympics, but he passed away in 2007.

He said that Beijing's bidding success could not be disconnected from outstanding achievements that China had made in terms of economy, culture, sports and other areas since the country's reform and opening up.

Late IOC member and vice president He Zhenliang was best known for his role in helping Beijing land the 2008 Olympics.

He could not hold back tears when receiving congratulations from other IOC members and his friends.

"I have no pity in life after this," he said, also attributing Beijing's bidding success to the overall development of the city and the country.

"Those members who supported us become more staunch, while those who were against Beijing's bid changed their minds."