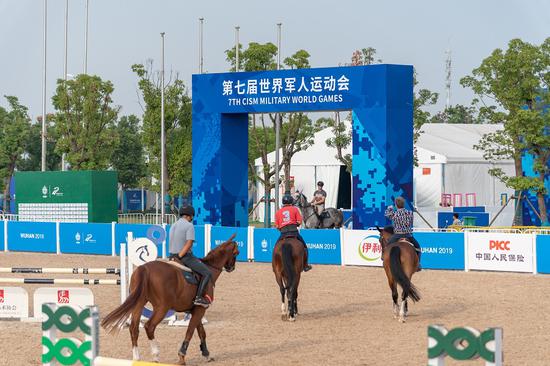 Competitors prepare for the equestrian event of the Military World Games in Wuhan, Hubei Province, Oct. 14. (Photo provided to chinadaily.com.cn)

Wuhan is ready to welcome some of the world's finest riders to display their kills at the seventh Military World Games that will kick off this Friday in the capital of Hubei province.

After the last group of horses came to the stable at Wuhan Business University, a total of 74 horses for the equestrian and 40 horses for the modern pentathlon's show jumping event of the Military World Games had all arrived in Wuhan.

Wuhan Business University, which will host equestrian and the modern pentathlon events of the Military World Games, is all set to stage quality competitions as the venues, working staff and volunteers are all standing by.

Equestrian riders will compete in a brand new venue at Wuhan Business University, which meets the standards of the sport's global governing body, the FEI.

Construction of the complex began in November 2017 and took just a year to complete. After the games, it will become a public sports park.

To ensure the safety of the horses, the university has also established a special equine hospital of 600 square meters, complete with specially designed ambulances for the animals. During the competition, a team of veterinarians and experts will stay in the hospital to deal with emergencies and provide help to horses in need.

"As a university that has three venues for the Military World Games, Wuhan Business University is making final preparations for the games, as 233 working staff and 1,037 volunteers are ready to serve the competition," said Wang Qinghua, the principal of the university and executive director of the games' equestrian and modern pentathlon competition committee.

"During the construction, Wuhan Business University aimed at building venues that meet international standards, organizing quality competitions. We will also make sure the venues will benefit the school's future development and the national fitness campaign after the games."