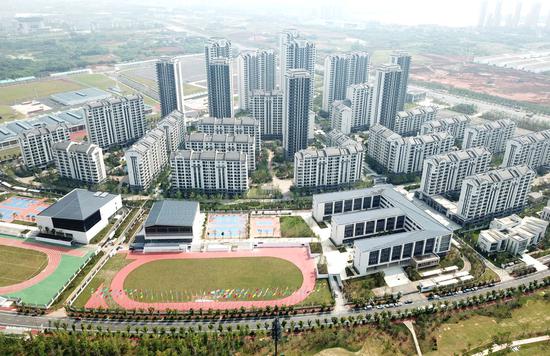 The athletes' village for the 7th Military World Games will open on Friday in host city Wuhan, Hubei province, according to the village's administration committee on Wednesday.

It is the first time that an athletes' village has been constructed for the Military World Games, a sports event for military athletes that has been operated by the International Military Sports Council since it was first held in Rome in 1995.

Beginning Oct.. 15, the village is expected to welcome nearly 10,000 athletes and delegates from more than 100 countries before the games kick off on Oct. 18.

It will hold daily welcoming ceremonies for delegations taking part in the games from Oct. 15 to 17 at its national flag raising square.

The Chinese delegation will settle in the village on Friday.

The construction of the village started in March 2017 and was completed in April. It consists of four zones that provide residential apartments, public services, logistics and other operations including medical treatment and fitness, as well as space for administration committees and conferences.

With an area of 56.5 hectares, the village is no more than an hour away from the city's 34 games venues.

About 150 people will work at the village's service center, helping delegations with coordination, information and other services during the games, the center's director, Li Jun, said at a news conference in Wuhan on Wednesday.

"Our responsibility is to provide comprehensive and high-quality services for the guests so that they can arrive smoothly, concentrate on the competition and enjoy themselves while staying in Wuhan," he said.

Xiao Zhiyong, the spokesman of the village's administration committee, said the design of the village took into account many special Chinese features.

The overall layout of the village is fan-shaped with five classical gardens featuring plum blossoms, orchids, bamboo, chrysanthemums and lotus.

The architecture also follows a traditional Hubei style, fitted with energy-saving and environmental friendly equipment such as permeable outdoor flooring that can help store rainwater, according to Xiao.