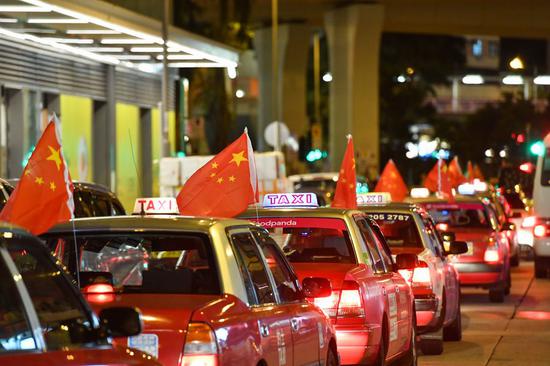 "My income has been shrinking since June, and my family have to tighten our belts now," talking about the impact of the prolonged unrest in Hong Kong, taxi driver Tse Ting-cheung said with a wry smile.

Tse has been a taxi driver in Hong Kong for over 10 years. In his eyes, the past four months may be "the worst period of time" in his career.

With violence and chaos lasting for four months, the number of tourists and local passengers has plunged, leading to a sharp decrease in taxi drivers' income.

Even during the recent Chinese National Day holiday, traditionally dubbed as an annual "golden week" for Hong Kong's tourism and other related sectors, things did not get any better.

"This year's 'golden week' was totally different from the previous ones," Tse said. During the holiday he saw few people in places such as Tsim Sha Tsui and Mong Kok, which used to be crowded with tourists and shoppers.

In the face of a drastic decrease in income, Tse and his wife now have to save every penny. "Sometimes we go to the street market shortly before the closing time, so as to buy food at bargain prices," he said.

Like Tse, many of the tens of thousands of taxi drivers in Hong Kong, as the main bread earners of their families, are feeling stressed out by the unrest, according to Wong Tai-hoi, secretary-general of Hong Kong Taxi Drivers and Operators Association.

The economic pressure on many taxi drivers "has reached a critical point" as their turnover could barely cover car rental, oil and other costs, Wong told Xinhua in a recent interview.

Besides, concerns for personal and property safety are also on the rise among taxi drivers as the rioters have been escalating the acts of violence and vandalism, Wong said, adding that a taxi driver was beaten up and seriously injured by black-clad rioters days ago in a street in Sham Shui Po.

Tse also showed concerns over his own safety in the violence. "I'm a chatterbox and I like chatting with my customers. But recently I became more cautious. If some young people dressed in black get on my taxi, I will remain silent to avoid clash," he said.

The most disturbing thing for taxi drivers, Tse said, is that sometimes they barely know whether they could send the passengers to their destination as the rioters spread violence to different parts across Hong Kong and may paralyze traffic anywhere.

"The rioters not only seriously disturb people's life, but also wantonly assault people who hold different views from them. It is repugnant," he said.

Wong said his association has received complaints from many taxi drivers expressing concerns that Hong Kong has been messed up by the continued violence.

"We hope the HKSAR government will end the violence and chaos in accordance with law, and we hope even more the public will see the situation clearly and never take part in violent activities for the good of Hong Kong," he said.