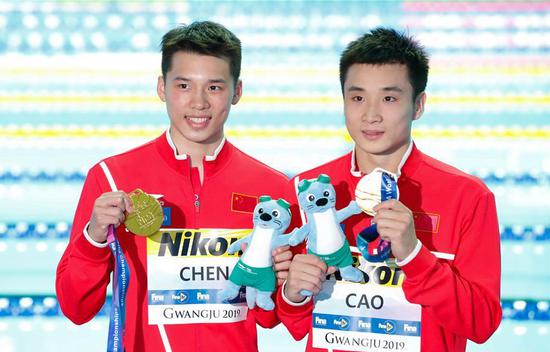 Former Olympic champions Cao Yuan and Chen Aisen dominated the water on Monday night by winning gold in the men's 10m synchro platform as China clinched the seventh gold at the world championships.

Cao was the champion at 2012 London Olympic Games and the bronze medalist in 2013 worlds. His partner Chen was a two-time Olympic champion.

Cao, moved to 3m springboard since 2013 and won the 3m champion in 2016 Rio Olympic Games. In Gwangju, he claimed 3m synchro with Xie Siyi two days ago and then built up his reputation on the synchro platform, again.

Started from second place in the first round, Cao/Chen led the field from the second dive and never looked back by keeping high poise in their four free attempts, all in 90+ points. Their fourth dive collected as high as 97.20 and snatched the gold in 486.93. 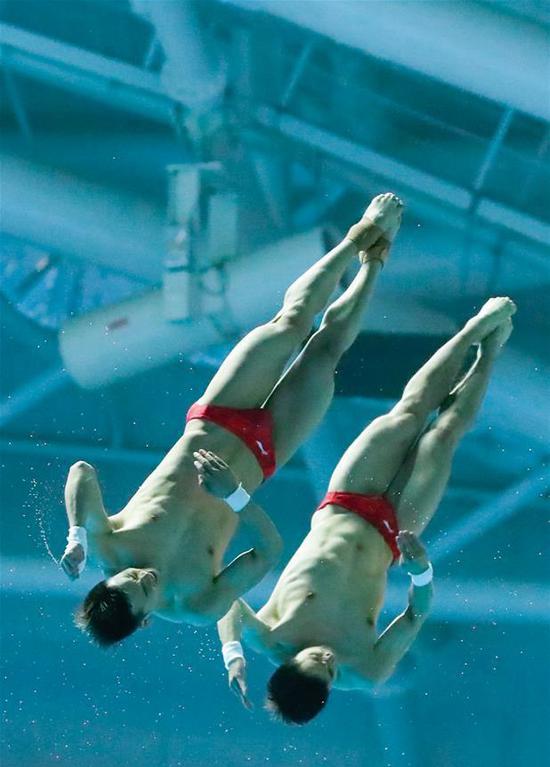 "I competed in the synchro springboard before and now in the synchro platform at the worlds. I need to get used to different events, different partners and different feeling in the air. I made mistakes in the entry tonight and did not come up to my goal -- to dive as perfect as possible," said Cao who will compete in 3m springboard on Wednesday.

"We talked about our target before the final that we hoped to get points over 500+. We were very close to that. So next time we should set our goal higher than that, and therefore we may have better results. It was the best performance I did this year. We were lucky that we made the team through our three-leg national Olympic trials," Chen Aisen said.

Russian pair Viktor Minibaev/Aleksandr Bondar also had a good performance in the final and finished in 444.60, 42.33 behind the Chinese divers. British duo Thomas Daley/Matthew Lee (Matty Lee) settled for the third place at 425.91.