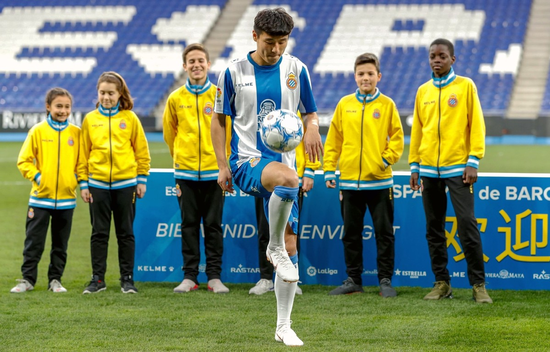 Espanyol's new Chinese forward Wu Lei controls a ball during his official presentation at the RCDE Stadium in Barcelona, Catalonia, on Jan 29, 2019. (Photo/Xinhua)

"In terms of my age, I'm in my prime and I'm much more mature than before. I was not that prepared to play in a foreign league years ago. Now, it's a great time.

"Last winter, several foreign clubs contacted me, even including some that were in the UEFA Champions League. But for me, the priority is to guarantee playing time. Also I have to consider the style of a league and if I can fit into a team's system.

"I think Espanyol wants my ability to score and my speed. For the past two months, I've been in the national team to prepare for the Asian Cup and Shanghai SIPG gave me great support and help.

"I hope SIPG can maintain its momentum. One day when I come back to the domestic league, I'll definitely return to SIPG."

SIPG chairman Chen Xuyuan said the club was sad to see Wu go but urged the forward to aim high and look to the example of NBA legend Yao Ming.

"Everyone knows how important Wu Lei is to our team," said Chen.

"However, to level up the strength of Chinese soccer and help Wu Lei's own individual development, we had to make the decision.

"I told Wu Lei to become a great player. After 10 or 20 years, people will still remember him.

"I hope he can learn from Yao Ming. He should not only try his best to produce great performances abroad, he should learn to advance China's soccer development."