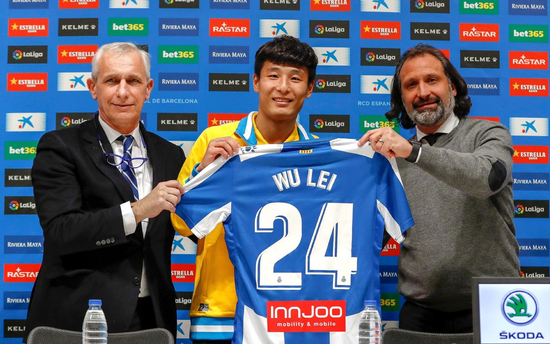 "I sincerely hope more Chinese players will be able to play in foreign leagues, which would benefit China's soccer development.

"I'm so happy to come to play in La Liga, which has been my dream for a long time. I finally achieved it and I have great expectations for the future.

"Now my priority is to adjust myself to the pace of the new league and fit into the team's system to actually play as soon as possible."

Prior to Wu's transfer, Zhang Yuning was China's lone representative in Europe's elite divisions, although the 22-year-old has struggled for minutes at Dutch top-flight side Den Haag on loan from England's West Bromwich Albion.

Zhang Chengdong, currently with Hebei China Fortune, became the first Chinese to play in La Liga in December 2015 when he suited up for Rayo Vallecano on loan from Beijing Guo'an.

However, Wu is the first to sign a permanent La Liga contract and the striker is confident the historic transfer has come at just the right time in his career, having declined the opportunity to move last year.

"I had to help Shanghai SIPG win a CSL title. After I achieved that important goal, it was time for me to step out of the domestic league," he said.