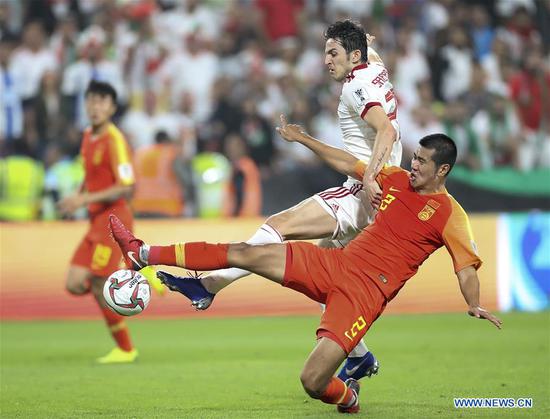 Liu Yiming (R) of China vies with Sardar Azmoun of Iran the 2019 AFC Asian Cup quarterfinal match between China and Iran in Abu Dhabi, the United Arab Emirates, on Jan. 24, 2019. (Xinhua/Cao Can)

Sardar Azmoun scored and laid on another as Iran beat China 3-0 on Thursday to reach their first AFC Asian Cup semifinal since 2004.

Iran, who had missed the semifinals of the last three Asian Cups, ended the heartbreaking record thanks to unstoppable Azmoun. The Rubin Kazan striker provided an assist for Mehdi Taremi to break the deadlock and scored the second in the first half.

"We deserve this Victory and I am happy we made the semifinals, but we know the big sharks will come for us next," said Iran coach Carlos Queiroz.

The three-time Asian champions will next face Japan, who oust Vietnam 1-0 earlier in the day, in the semifinals.

Azmoun's header from a corner almost put Iran ahead in the 11th minute but the 38-year-old veteran Zheng Zhi cleared the threat off the line. However, veteran defender Feng Xiaoting's mistake allowed Azmoun to send a beautifully-weighted pass to Mehdi Taremi who opened the scoring on 18 minutes.

"We kept giving them pressures to force them make mistakes, then took the advantage from it to score," the Portuguese coach said.

China coach Marcello Lippi made two changes after 28 minutes as China tried to find a way back into the game, but the momentum remained with Iran. Azmoun took advantage of another defense error, dribbling past Chinese keeper Yan Junling and made it 2-0.

"When you face a strong team like Iran, you have to avoid making the mistakes. I did not expected we lost the game in this way," Lippi said.

Struggling to create a clear-cut chance, China waited for their first shot until Wu Lei fired over the bar before the break.

Iran went close to a third in the 60th minute as Ehsan Haji Safi smashed an effort from the left side of the box, which was well parried by Yan Junling.

Substitute Yu Dabao were close to pulling a goal back for China when he made a surging run into the box with eight minutes remaining but his shot went wide.

China were in desperate trouble in the stoppage-time as Iran bulit a three-goal lead by substitute Karim Ansarifard, who sealed the win with Taremi's assist on 91 minutes.

"What makes me sad is we gifted a team like Iran three goals in such an important match. Our players did thier best during the tournament, but tonight, I don't want to say 'thank you' to them," said Lippi.