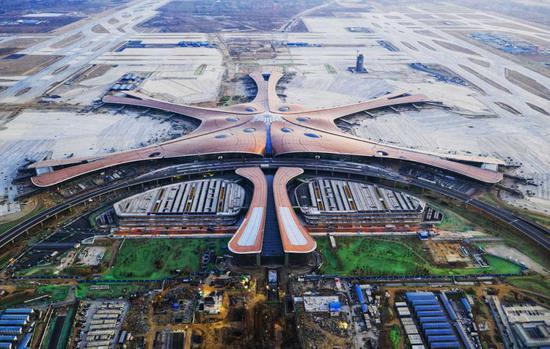 Photos taken on January 21, 2019, show the Beijing Daxing International Airport under construction in Beijing. The facade decoration project is finished, while the interior decoration is 80 percent complete. The new airport is scheduled to begin operation on September 30, 2019. (Photo: Cui Meng/GT)

With the first test flight completed on Tuesday, Beijing Daxing International Airport has started a hectic flight check due to end on March 15.

Upon the completion of the tests, sources with the air traffic management authority said that the airport would be ready for operation.

Che Jinjun, director of the Air Traffic Management Bureau of the Civil Aviation Administration of China (CAAC), said that the airport's air traffic control support project was the largest of its kind in China, spanning Beijing and Hebei Province.

It was a tough task to build such a huge project within a short period of time, said Che, adding that both the construction and operational preparations were demanding and faced more challenges.

Xiong Jie, director of the flight check center of the CAAC who led the inspection team, said it was quite rare to see four high-quality runways simultaneously constructed and tested across the world.

Wen Xuezheng, chief of the North China Air Traffic Management Bureau, said after the successful completion of the first test flight, the airport's operational preparations had entered a sprint period.

Scheduled to open before Sept. 30, the airport sits at the junction of Beijing's Daxing District and Langfang, a city in Hebei. The new airport is expected to handle 45 million passengers annually by 2021 and 72 million by 2025.