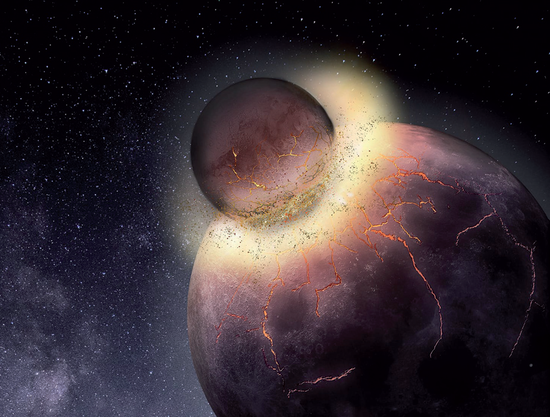 Rice University petrologists have found Earth most likely received the bulk of its carbon, nitrogen and other life-essential volatile elements from the planetary collision that created the moon more than 4.4 billion years ago. (PHOTO PROVIDED BY RICE UNIVERSITY)

The existence of the moon might be connected to the existence of life on Earth, according to a new study by a group of petrologists at Rice University. The study was published in Science Advances this month.

The study suggests that Earth most likely received the bulk of its carbon, nitrogen and other life-essential volatile elements from the planetary collision that created the moon more than 4.4 billion years ago. Most of Earth’s essential elements for life — the carbon and nitrogen in you — probably came from the other planet.

According to a news release from Rice University, study lead author and graduate student Damanveer Grewal gathered evidence to test a long-standing theory that Earth’s volatiles arrived from a collision with an embryonic planet that had a sulfur-rich core.

The evidence was compiled from a combination of high-temperature, high-pressure experiments in a lab specializing in studying geochemical reactions that take place deep within a planet under intense heat and pressure.

“From the study of primitive meteorites, scientists have long known that Earth and other rocky planets in the inner solar system are volatile-depleted,” said study co-author Rajdeep Dasgupta, a professor of earth science at Rice University. “But the timing and mechanism of volatile delivery has been hotly debated. Ours is the first scenario that can explain the timing and delivery in a way that is consistent with all of the geochemical evidence.”

The experiments simulated the high pressures and temperatures during core formation, tested the idea that a sulfur-rich planetary core might exclude carbon or nitrogen, or both, leaving much larger fractions of those elements in the bulk silicate as compared to Earth.

Sun said that previous studies focused primarily on carbon alone. This study examined carbon as well as nitrogen and sulfur. After simulating various possibilities on a computer, the group concluded that all evidence was consistent with a moon-forming impact involving a volatile-bearing, Mars-sized planet with a sulfur-rich core.

“What we found is that all the evidence — isotopic signatures, the carbon-nitrogen ratio and the overall amounts of carbon, nitrogen and sulfur in the bulk silicate Earth — are consistent with a moon-forming impact involving a volatile-bearing, Mars-sized planet with a sulfur-rich core,” Grewal was quoted as saying.

This research was NASA-funded with Dasgupta as the principal investigator. He said it does not appear that Earth’s bulk silicate on its own could have attained the life-essential volatile budgets that produced our biosphere, atmosphere and hydrosphere.

“That means we can broaden our search for pathways that lead to volatile elements coming together on a planet to support life as we know it,” Dasgupta said.