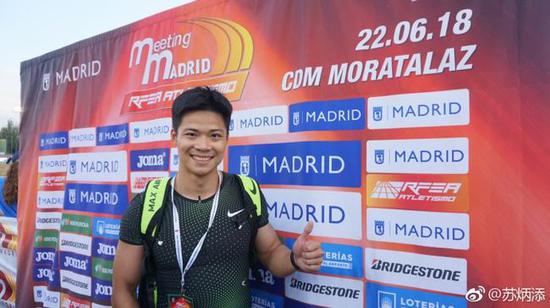 Chinese sprinter Su Bingtian has moved 0.08 seconds closer to the men's 100 meters world record held by Jamaican legend Usain Bolt after he leveled the Asian record of 9.91 seconds at the 2018 IAAF World Challenge Meeting in Madrid on Friday.

The 28-year-old won the title with a tail wind of 0.2m/s, also refreshing China's national record set by Xie Zhenye at the Meeting de Montreuil three days ago, by six hundredths of a second.

Su's previous personal best was 9.99 seconds, which he clocked twice at the 2015 IAAF Diamond League Eugene meeting and the World Championships in the same year as the first Asian-born athlete to run under 10 seconds.

Prior to Su's achievement in the Spanish capital, Qatar's Femi Ogunode, born in Nigeria, set the Asian record of 9.91 seconds at the 2015 Asian Championships in Wuhan, China.

Su dashed to 9.90 seconds, a possible new Asian record, at this year's Diamond League Eugene meeting, but that failed to be certified by IAAF due to a tail wind of 2.4m/s.

Su continued his hot momentum into the year of 2018, after claiming the silver medal at the World Indoor Championships in Birmingham early in March with a personal best of 6.42 seconds and becoming the first male Chinese to win a global medal in an individual event.

Italy's Filippo Tortu bagged the silver with 9.99 seconds, while the third place went to South African sprinter Akani Simbine at 10.01.