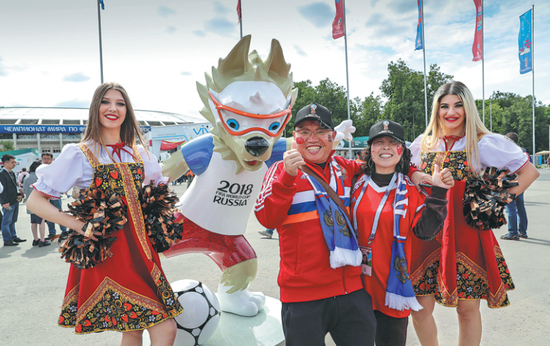 A Chinese couple from Jiangxi province say they are excited about attending World Cup matches as they pose with a mascot in Moscow on Thursday. (Photo/Xinhua)

Office worker and soccer fan Fu Rong, 27, will start a relatively economical but complicated journey to the World Cup in Russia to realize her dream of watching her favorite star, Lionel Messi, and Argentina's storied team.

Fu, who works at a Beijing-based public relations company, will fly to Irkutsk, a city in Siberia, on Sunday, where she will take a 30-hour train trip to Novosibirsk, followed by another 25 hours on a train to Yekaterinburg.

"It will be my first time to see Argentina play a World Cup match in a stadium," she said.

"I wanted to watch Messi and Argentina four years ago at the Rio de Janeiro World Cup. But it's too far from China, and I could not afford the travel and accommodation cost then."

Fu may be alone on her trip, but she's unlikely to be lonely.

Some 60,000 Chinese fans are expected to visit Russia for the tournament, according to FIFA, soccer's international governing body. Of the 2,403,116 World Cup tickets released as of a week ago, more than 40,000 had been sold to Chinese fans, with the number expected to rise after the World Cup kicked off Thursday evening.

Six children from Danzhai, a poverty-stricken county in Guizhou province, have been invited to be flag bearers at the curtain-raising game between Russia and Saudi Arabia on Thursday.

The special envoy of President Xi Jinping, Vice-Premier Sun Chunlan, attended the opening ceremony on the invitation of the Russian government.

Fu also will feel the presence of Chinese companies. Seven are sponsoring the soccer extravaganza as a way to step into the global market, compared with only one company four years ago in Brazil.

She will even be able to order crawfish, a popular Chinese snack－100,000 of the crustaceans are being sent to Russia from Hubei province as a treat for fans from around the world.

"Though the Chinese men's national soccer team failed to qualify for this year's event, the love for the sport is still there," said Zhu Hui from Ningbo, Zhejiang province, who will fly to Moscow next week to watch his favorite team, Brazil.

"Russia is our neighboring country, and this time lots of my friends will go there and watch some games. I can't imagine how many Chinese would have flown to Russia if our team had made it to the finals."

After its only World Cup appearance in 2002 in South Korea and Japan, Team China has been fighting to get back in. Xi, an avowed soccer fan, has expressed hope that China will host a World Cup and become a power in the sport.