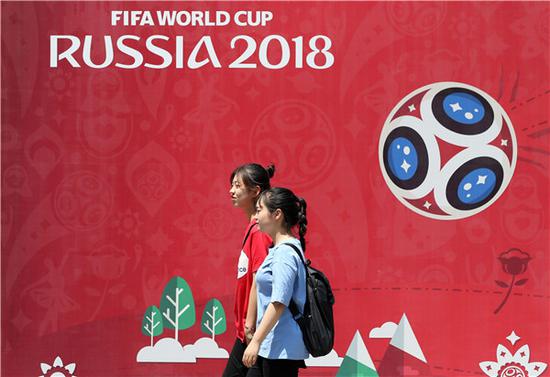 Posters pop up around China, like this one seen on Wednesday in Weifang, Shandong province, promoting the upcoming 2018 World Cup in Russia. (ZHANG CHI/FOR CHINA DAILY)

Chinese fans may be accustomed to a World Cup without Team China, but the World Cup would never be the same without Chinese fans. That is especially the case for the upcoming extravaganza hosted by one of China's neighbors.

The disappointment of the nation failing to qualify for the 2018 FIFA World Cup did not stop tens of thousands of Chinese soccer fans from flying to Russia for their soccer dream trip.

Of the 2,403,116 World Cup tickets released between September and Friday, 40,251 had been sold to Chinese fans, according to FIFA. That made them the ninth biggest fan group in ticket sales. Russian fans ranked first with 871,797 tickets, followed by United States fans with 88,825 tickets. Another 100,000 tickets were still on sale.

Some 60,000 Chinese fans have planned to attend matches of the World Cup, which will kick off on Thursday, Yuri Tsurkan, the chairman of the Russian-Chinese Tourism Promotion Association's council, told Russian news agency Tass.

"We hadn't expected that China, whose team is not going to the championship, would demonstrate such strong interest. According to our association, it is about 60,000 to 70,000 (fans)," Tsurkan said.

He also stressed that the passion of Chinese fans "has exceeded all expectations", and the exact number of Chinese fans attending the matches will be clear only after the end of the World Cup.

Chinese soccer fan Zuo Ziyang even asked his boss for leave in order to watch the competition between the world's soccer powerhouses in Russia.

"I actually don't have a vacation during the World Cup period, so I had to ask my boss for leave," Zuo told China Daily. "Of course I chose the World Cup instead of work.

"I will arrive at St. Petersburg on June 13 and stay in the country for five days with my girlfriend to watch the game between Portugal and Spain. I will also explore the country to experience its culture and customs. Of course I support the Chinese team, and it's a pity that we failed to qualify again. Personally, I like the French team and hope that they will have a great performance."

Free transportation will be provided for spectators and many of the seats have been booked by Chinese fans.

The Transport Directorate of FIFA World Cup Russia 2018 said in April that 728 trains operating on more than 30 routes between the 11 host cities have been reserved for free transportation of fans, making over 440,000 seats available during the World Cup.

The Federal Passenger Co, which organized the fan train rides, said in May that the company was seeing a rising demand from Chinese fans, according to Pyotr Ivanov, its director general. Most of the free tickets had been booked by Russian fans, followed by Colombian and Argentine fans. Chinese fans were sixth, he said.

Getting into Russia also has been made easier. FAN ID, an identification document required by Russian authorities, provides visa-free entry to Russia for foreign tourists who have purchased match tickets. Such fans will be able to enter and remain in the country starting 10 days before the first match and ending 10 days after the last match.

The passion of Chinese soccer fans has led to a boom of Chinese tourists in Russia.