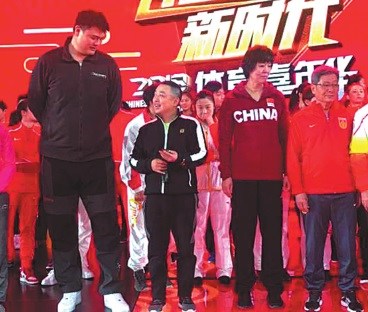 Featuring eight-time NBA All-Star and Chinese Basketball Association boss Yao Ming, table tennis legend Liu Guoliang and over 100 other sporting celebrities, the gala will be the equivalent to Chunwan, the China Central Television (CCTV) New Year's Gala, which is one of the world's most watched annual telecasts.

Towering over the other stars at Monday's rehearsal was Yao, who is marshaling the ongoing Chinese basketball reform.

Liu, who has retired as head coach of the Chinese table tennis team to commit himself to the promotion of Chinese sports culture around the world, was seen trading jokes with Yao and Ding Ning, the Grand Slam winner of Olympic, world championship and World Cup table tennis singles titles.