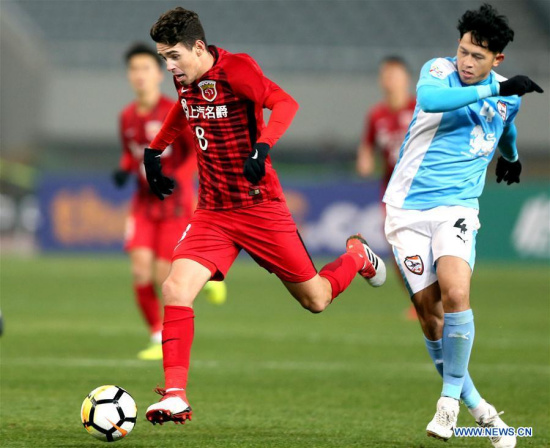 Yu Hai scored the only goal of the game as last year's semifinalists Shanghai SIPG secured their third successive appearance in the AFC Champions League following a 1-0 victory Tuesday night over Thailand's Chiangrai United in Tuesday's playoff round.

Tianjin Quanjian overcame Phillipines' Ceres Negros FC 2-0 in Tianjin. The hosts took the lead after 18 minutes, as Anthony Modeste towered the ball above the visitors' defence to smash home a powerful header. The home side's second goal involved all three of Tianjin Quanjian's international stars, with Axel Witsel's header in midfield finding Alexandre Pato who expertly cushioned the ball over the top of the Ceres-Negros defence to play in Modeste, who made no mistake with just the goalkeeper to beat.