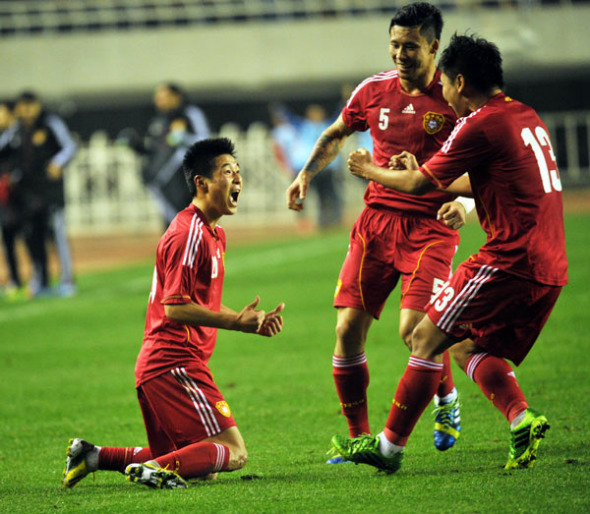 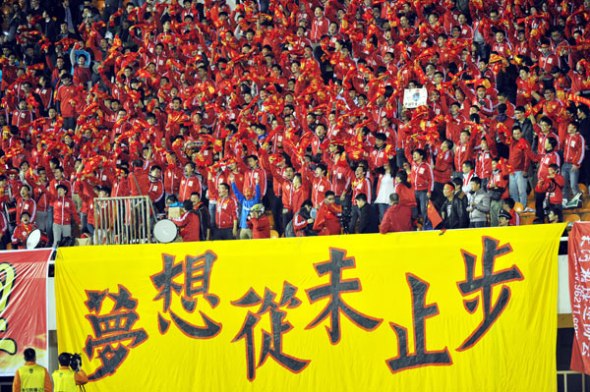 A slogan reading "Dream never stops" is shown on the stand during the match between China and Indonesia in Xi'an city, Northwest China's Shaanxi province on Nov 15, 2013.[Photo/Asianewsphoto]

China kept alive its hopes of qualifying for the 2015 Asian Cup in Australia after beating Indonesia 1-0 here on Friday.

Wu Lei headed in the only goal of the game on the stroke of half time. The 22-year-old forward was named 'Player of the match' in front of 33,217 home fans.

"I am glad to score such an important goal, it put us in an advantageous position in the following matches," said Wu, who scored 15 goals in 2012-2013 China Super league.

With the hard-earned victory China remain second in Group C, four points ahead of Iraq who will face group leader Saudi Arabia later on Friday in Dammam.

Indonesia created some clear chances in the second half. However, their attackers were not on the scoresheet.

"It's pity that we missed the opportunity to level the game.I think China is getting better and better, but they need to work more for the next match against the Saudis," said Indonesia coach Jacksen Tiago.

After Leading Guangzhou Evergrande to the champion of AFC Champions League, Marcello Lippi, who has been rumored to be appointed the next head coach of the Chinese national team, watched the match in the stadium.