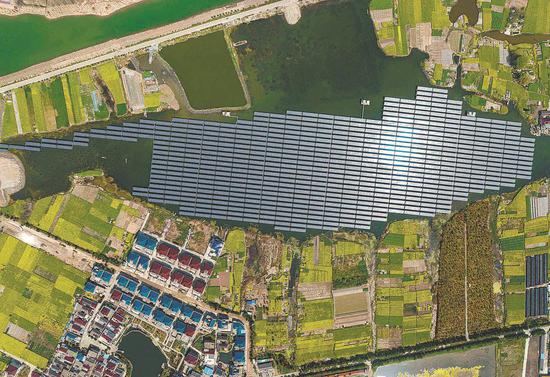 China vows to speed up the construction of the second batch of massive wind and solar power projects in the Gobi Desert and other arid regions, according to a package of policy measures that aims to stabilize the economy announced by the State Council recently.

The second phase of wind and solar power projects will still focus on the Gobi and other sandy and rocky regions, and is expected to encourage investment of up to 3 trillion yuan ($450.9 billion) in related industries, it said.

The move comes amid the country's latest efforts to accelerate the planning and construction of large-scale wind and solar projects.

China launched its first phase comprising 100-gigawatt total wind and solar power capacity in the desert areas by the end of 2021, which covers 19 provinces nationwide, as the country has been promoting the adjustment of its industrial and energy structures.

According to a statement jointly released by the National Development and Reform Commission, China's top economic regulator, and the National Energy Administration at the end of May, the country will increase its total installed capacity of wind and solar power to over 1.2 billion kilowatts by 2030 while covering as many as 50 percent of the nation's buildings with rooftop solar panels.

As China sees its percentage of solar and wind power steadily climbing and its costs gradually decreasing in recent years, it is necessary to further develop solar and wind power facilities and ensure the two sectors play a key role in ensuring the country's energy security, to accelerate the construction of a clean, low-carbon and effective energy system.

Total renewable energy consumption will reach 1 billion tons of standard coal by 2025, according to the country's renewable energy development plan for the 14th Five-Year Plan period (2021-25), while the scale of non-electric utilization including geothermal heating, biomass heating and fuel, as well as solar heat utilization, will also exceed 60 million tons of standard coal.

An analyst said China's plan to further optimize its energy mix by building massive wind and solar power facilities in the country's Gobi and other desert areas will facilitate the country's ambition of reaching more than 1,200 GW of installed solar and wind capacity by 2030.

Wei Hanyang, a power market analyst at research firm BloombergNEF, said renewable energy projects are usually capital-intensive and the GW-level bases that will be under construction on massive deserts will require multiple channels of financing and policy support, which China excels at.

"It is also likely that large State-owned enterprises will reallocate some funding from previous coal projects to the renewable bases so that the process can be accelerated," Wei said.

"As more batches of GW-level bases are to be constructed in the future, China will need to invite more social participation and set up a proper compensation mechanism. For example, the level of power market contracts will need to be better suited for investors to estimate their accurate cash flows."

"It is also necessary to plan and build more ultra-high voltage transmission lines for connecting the renewable energy with coastal demand centers, likely hitting 300 GW of transmission capacity by 2025 from around 200 GW last year," Wei added.

According to a statement released on Wednesday by the NDRC, China will generate 3.3 trillion kilowatt-hours of electricity from renewable energy by 2025 as part of its plan to further boost its green energy transition during the 14th Five-Year Plan period.

The increase in renewable energy generation will also exceed 50 percent during the period while power generated by wind and solar power will also double, it said.

Non-fossil energy consumption will account for around 25 percent of the total by 2030, and renewable energy will further replace fossil fuels to facilitate the country's construction of a low-carbon energy system, it said.