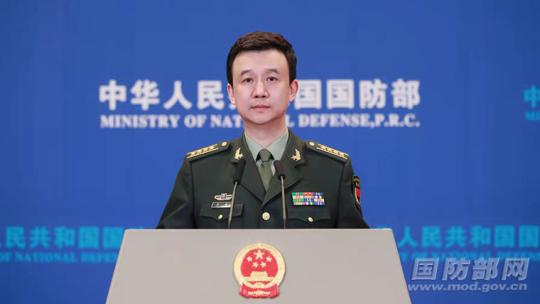 "Canadian military aircraft recently stepped up reconnaissance and provocative actions against China under the pretext of implementing United Nations Security Council resolutions," said ministry spokesman Senior Colonel Wu Qian in a statement. "That jeopardized China's national security and the safety of front-line staff of both sides.

"The Chinese military responded immediately in a reasonable, strong, safe and professional way, and lodged solemn representations to the Canadian side via diplomatic channels."

The spokesman urged the Canadian side to face the seriousness of the matter, strictly constrain its military and not to take any risky and provocative actions. "Otherwise, the Canadian side should be responsible for all severe consequences."

Earlier this month, Canada's military accused Chinese pilots of acting "unprofessionally" during recent encounters with its patrol aircraft that were conducting surveillance operations in what it said was "international airspace".

China's Foreign Ministry also expressed firm opposition to Canada's actions. "We urge the Canadian side to recognize the objective facts and promote the normal development of China-Canada relations by practical action," Zhao Lijian, a spokesman for the ministry, said at a news conference on Monday.

Separately, late on Sunday, Australia accused the Chinese military of putting an Australian Defense Force flight crew at risk when their P-8 surveillance craft was intercepted on May 26 over the South China Sea.

Zhao refuted the accusation. "The Chinese military has consistently taken actions in accordance with safety norms and professional requirements based on international law and conventions," he said.

"China would never allow any country to undermine its sovereignty and security, and harm the peace and stability in the South China Sea under the pretext of 'freedom of navigation'," the spokesman said, urging the Australian side to speak and act cautiously to avoid miscalculation and serious consequences.

Yuan Zheng, a senior researcher at the Chinese Academy of Social Sciences, said it's quite questionable for both Canada and Australia to take these recent actions in areas near China.

"Why did the two Five Eyes alliance countries, which both sit far from China, send their surveillance craft to China's neighboring airspace in East Asia?" he said, adding that the actions weren't transparent.