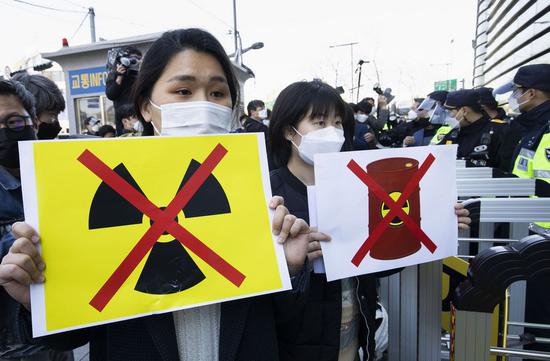 Rep. Seo Sam-seok of the liberal Democratic Party on Monday held a forum to find ways in cooperation with neighboring countries to tackle Japan's plan to dump the contaminated radioactive water next spring.

"The contaminated water released into the ocean will spread across the entire Pacific Ocean in 10 years and affect almost all of our sea. Marine pollution will be inevitable, so the government and the political circle should proactively act for the safety of people," Seo said in the forum.

The incoming government of President-elect Yoon Suk-yeol, scheduled to be sworn in as president on May 10, also planned to sternly deal with the tritium-laced water release by Japan, a local daily JoongAng Ilbo reported citing the presidential transition committee.

The newspaper said the Yoon government will strengthen radiation checks and the country origin mark of imported marine products while expanding the origin labeling in restaurants.

The current Moon Jae-in government has completely banned the import of marine products caught in the Japanese waters near the Fukushima prefecture.

Civic activists and local residents in Pohang, about 370 km southeast of Seoul, held a protest rally last week against Japan's plan to continuously discharge radioactive water into the Pacific ocean for 30 years beginning in 2023.

The Pohang Citizens Behavior, composed of six civic groups and residents, have campaigned since last July against the Japanese government as the port city is forecast to be one of the hardest-hit fishing areas by the release of the contaminated water.