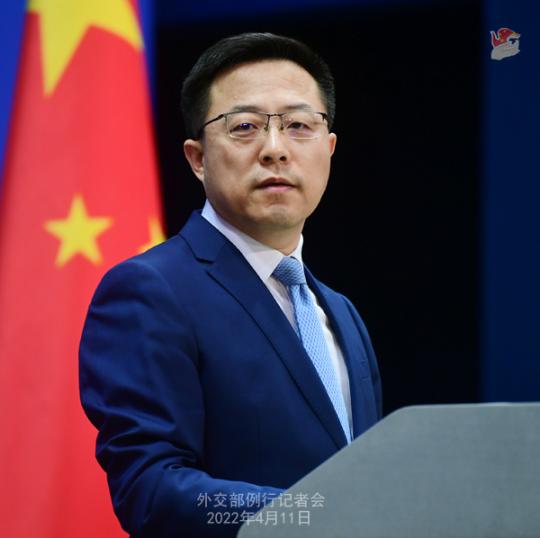 China has urged certain individuals not to repeatedly hype up the so-called territorial issue between Beijing and Moscow, saying on Monday that such rumors have no audience in either country and are doomed to fail.

Foreign Ministry spokesman Zhao Lijian made the remark at a daily news briefing, following the publication of an article titled "China's long game with Russia "by the United States-based news website The Hill, which speculated that China is nurturing a longer-term opportunity by staying close to Russia through the Ukraine crisis.

The article claimed that Russia could then be motivated to "lease or even sell" large parts of the Russian Far East to China.

"The report is a replica of the 'China threat theory', which in essence aims to drive a wedge between China and Russia," Zhao said.

China and Russia made it clear in their extended Treaty of Good-Neighborliness and Friendly Cooperation last year that the boundary issue left over from history has been completely resolved and that neither side has any territorial claim against the other, he added.

In the treaty, the two countries also expressed commitment to building their common border into a bond of long-lasting peace and friendship from generation to generation, Zhao said, adding that China and Russia have always matched their words with their deeds over the past 20 years.

He reiterated that Beijing and Moscow have no intention of forming an exclusive clique, and it's simply impossible to drive a wedge or sow discord between the two countries, adding that China-Russia relations can withstand the tests of changes in the international landscape.

Zhao chastised certain major Western countries for, on the one hand being "busy adding fuel to the fire, constantly creating new differences, while at the same time linking the Ukrainian crisis with Sino-Russian relations in an attempt to achieve their ulterior strategic goals".

"This is not what a responsible major country should do, and we firmly oppose it," he added.

In another development, Zhao disputed claims made against China by North Atlantic Treaty Organization Secretary-General Jens Stoltenberg on the Ukraine issue.

Following a meeting of NATO foreign ministers on Thursday, Stoltenberg claimed that China was unwilling to condemn Russia over the Ukraine issue and announced that NATO's 2030 Strategic Concept would for the first time take account of how China's "growing influence and coercive policies "affect NATO's security.

As a product of the Cold War, NATO has long clung to an obsolete security concept, engaged in bloc confrontation according to the playbook of the old Cold War and reduced itself to some country's tool for hegemony, Zhao said.

China's development is an opportunity for the world rather than a threat to anyone, Zhao said, and he urged NATO to immediately stop making groundless accusations and provocative remarks against China and refrain from drawing lines according to ideological differences.