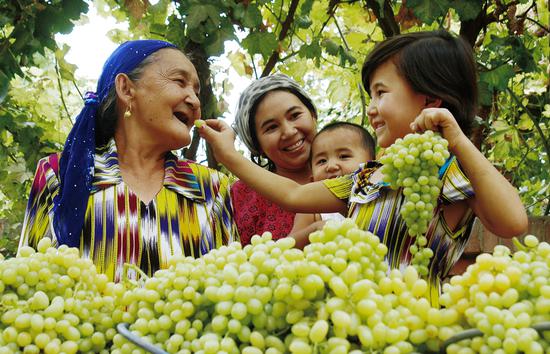 The Xinjiang Overseas Friendship Association held an online meeting on Friday for overseas Chinese in the United States who are from the Xinjiang Uygur autonomous region to better understand the region's development.

More than 20 overseas Chinese in the U.S. attended the exchange meeting. Many of them grew up in Xinjiang or their parents came from the region.

Zhong Ruiming, minister-counselor and consul general of the Chinese embassy in the United States, said the exchange will help overseas Chinese better understand their homeland and tell the true story of Xinjiang to U.S. society.

Against the backdrop of severe difficulties in China-U.S. relations, it is of great importance to promote people-to-people friendship, he said.

"I hope overseas Chinese and students continue to play the role of a bond and bridge, tell the stories of Xinjiang to American society, and help more Americans have a comprehensive, objective and true understanding of Xinjiang," he said.

Ilzat Ahmatjan, a member of the Standing Committee of the Xinjiang Uygur Autonomous Regional Committee of the Communist Party of China, said the CPC Central Committee has always attached great importance to Xinjiang and formulated a series of special policies to support the region's economic and social development.

Major achievements have been made in Xinjiang, and people of all ethnic groups in Xinjiang have a growing sense of achievement, happiness and security, he said.

Officials from Xinjiang introduced the region's ethnic unity, employment, protection of the right to freedom of religious belief, and protection of the cultural heritage of ethnic minorities. Attendees also watched videos to learn about specific cases.

Four representatives of overseas Chinese shared their stories of growing up in Xinjiang and the development and changes they have seen during their visits to their hometowns in recent years.

They said they will continue to share true and objective stories about Xinjiang to eliminate possible prejudice and misunderstanding, and use their own experiences to clarify false reports about Xinjiang.