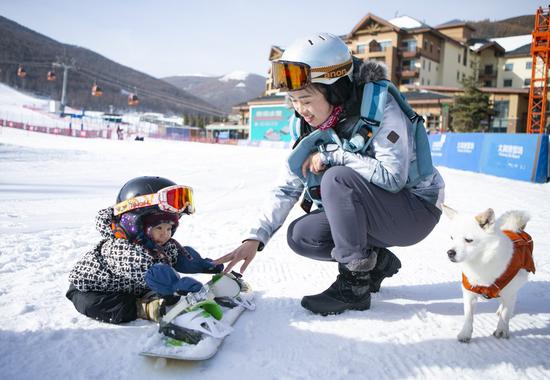 Yuji takes off her snowboard with the help of her mom. (Xinhua/Zhang Fan)

As the new snow season starts, enthusiastic skiers and snowboarders can't wait to rush to Chongli to hit the trails, among whom is an 11-month-old Wang Yuji who can barely walk.

A video of a baby girl sliding down the hill on a snowboard went viral on the internet recently, attracting a lot of attention.

Fan Xueyin, the mother of the toddler, told Xinhua reporters in an exclusive interview that it was little Yuji's first time snowboarding. "Me and my husband were both born in the 80s," Fan said. "We live and work in Beijing. One of us works as a designer, the other works in the Internet industry."

Despite not being professional athletes, Yuji's parents both love outdoor sports - cycling, camping and marathon, with the hope of stimulating their baby girl's interest in outdoor activities and snow sports.

"Because China will host the Winter Olympics soon, we are really encouraged to try ice and snow sports," the mom explained. "Recently, we learned to snowboard for the first time, so we also brought our child, with the mentality of trying something new."

"Our family's philosophy has always been that we encourage our child to do whatever sports we parents do. We don't choose sports that we don't know how to do ourselves. I went snowboarding with her dad, so we got her a little snowboard too." 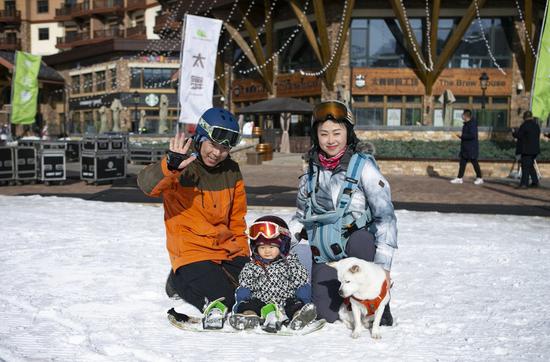 While snowboarding might be a bit too young for an 11-month-old who can barely stand or walk, Yuji's good physical fitness allows her to experience different sports.

"We thought we'd try it when she was older, but she really loved it," Fan added. "When she tried it at home, she wasn't scared and enjoyed it herself."

"We've come to Thaiwoo Ski Resort many times. Yuji has got along very well with the staff and neighbors. Unlike living in the city, it's wonderful for her to be able to play outside three or four hours a day here."

Being a sophomore in college in 2008 during the Beijing Summer Olympics, Fan recalled the splendid Olympic atmosphere back then. "We hope to come back to Chongli again soon to experience the Winter Games."