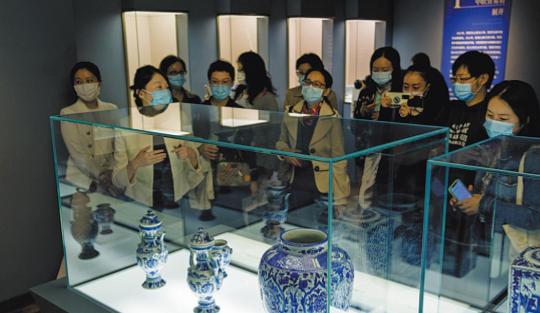 The painting The Annunciation by Portuguese artist Garcia Fernandes, created around 1535, depicts the story of the Archangel Gabriel telling the Virgin Mary that she is to have a child.

On a ledge between the pair stands a pot of lilies, which according to experts at the Shanghai Museum is typical of Chinese blue-and-white porcelain.

Lotus leaf designs on the shoulder and bottom of the pot, and a fish and algae pattern in the center, are depicted. These characteristics are examples of a pot probably made in Jingdezhen, in modern-day Jiangxi province, during the Jiajing period (1522-66) of the Ming Dynasty (1368-1644).

The Annunciationis one of three original works and more than a dozen replicas of renowned paintings on display at the Shanghai Museum in which Chinese porcelain features in Western art. The replicas include The Feast of Godsby Giovanni Bellini.

Visitors can see how such porcelain was used and treated after it was exported to the West, where it figured prominently in social life.

Titled West Encounters East: A Cultural Conversation Between Chinese and European Ceramics, the exhibition is being jointly staged by the Shanghai Museum and the Musee National des Arts Asiatiques-Guimet in Paris.

Yang Zhigang, director of the Shanghai Museum, said the display features artifacts from a total of 12 museums and institutions from seven countries. Being staged from Oct 29 to Jan 16, it is the largest project at the museum to involve extensive international collaboration since the start of the COVID-19 pandemic. It is also a great example of solidarity among the global museum community, Yang added.

The exhibition features a total of 206 important ceramic items and oil paintings that depict the stories of early trade and cultural exchanges between China and Europe.

Chen Jie, who researches exported ceramics at the Shanghai Museum, said that in the 15th century, new routes were found for vessels sailing between Europe and Asia, bringing significant changes to trading between East and West, and ushering in the Age of Exploration.

Porcelain, one of the most important Chinese commodities, was sold overseas in huge quantities, Chen said. These sales were not only evidence of the booming trade between China and Europe in the Ming and Qing (1644-1911) dynasties, but also of the exchanges of imagery, design, technology and ideas. In a cultural sense, porcelain is a medium for dialogue and interactions between East and West, she added.

The exhibition was conceived in 2015, when Yang visited the Guimet museum in Paris. He saw a digital representation of the domed ceilings at the Santos Palace in Portugal, decorated with some 300 Chinese porcelain plates. Yang and directors of the French museum discussed staging an international exhibition to show how Chinese porcelain was used in European courts centuries ago.

Preparations for the display started in 2019, and it was originally due to open in October last year, but the pandemic disrupted these plans.

Peng Tao, director of the ceramics department at the Shanghai Museum, said: "It turned out to be a highly difficult and complicated exhibition to stage. We encountered unprecedented challenges and setbacks in preparing for it."

As the pandemic continued, many of the museums' employees worked from home, but there were communication problems and assignments were delayed, Peng said.

The preparation period was repeatedly extended, but "we gained more time to take different perspectives of the curatorial work, delve deep into the academic and cultural content of the exhibits, and tell better stories about them," he said. "We believe visitors will find the exhibition different from those we have staged previously on the same subject."

Lu Minghua, former director of the ceramics department at the Shanghai Museum, said it is the seventh exhibition staged by the institution to feature porcelain for export.

The first such display was held at the venue in 1992, he said. The ongoing exhibition not only features items from museums at home and abroad, but also reveals "what happened after China's porcelain reached the West," Lu said.

A number of important pieces from several renowned museums are on public display in China for the first time, and it is also the country's first comprehensive exhibition of ancient porcelain from Japan and the Middle East, he said.

Bringing these treasured items to China during the pandemic was a huge challenge. Due to the nation's quarantine measures, many overseas museums found it impossible to send staff members to accompany exhibits during transportation.

Yang said before the exhibition opened on Oct 29: "We asked these museums to send their valuable items to China unaccompanied. The institutions extended the highest level of trust to the Shanghai Museum, thanks to many years of good partnerships and close collaboration. Eleven of the 15 overseas museums in the original plan agreed with such an arrangement. They did everything they could to make it happen."

For example, he said the Guimet museum had to apply for special permission from the French Ministry of Culture for items to travel unaccompanied to China, while directors of the British Museum reached a similar arrangement.

The exhibition in Shanghai is presented in three parts. The first, Transportation Between China and the West, outlines trade and exchanges between the country and Europe from the 16th to 18th centuries. As new sea routes were developed, Chinese porcelain reached more destinations in Europe, where it gained popularity among the wealthy.

The second part, Fusion Between China and the West, shows how Chinese porcelain integrated into and helped shape daily life in Europe. Visitors will find examples of this porcelain painted, mounted, modified, or intended as furnishings in Europe.

A digital reproduction of the domed ceilings at the Santos Palace in Portugal, decorated with Chinese porcelain, is among the exhibits in this section. Visitors will also discover Chinese Buddha statues repurposed as candle holders, celadon bowls redesigned as incense burners, and a Chinese incense container transformed into a cigarette box.

The third part of the display,Encounters Between China and the West, features fine examples of imitation Chinese porcelain and items made in China but bearing inscriptions from overseas. On some, Western words are written awkwardly by Chinese craftsmen, while others bear unrecognizable Chinese characters written by Western artisans.

One of the final exhibits visitors will see at the exhibition is a polychrome tile panel from the Rijksmuseum in Amsterdam, the Netherlands.

Created in the Dutch city of Delft between 1690 and 1720, the upper half of the panel depicts familiar figures from ancient Chinese folklore in a courtyard setting. The lower part features Chinese warriors on horseback encountering native Americans sporting feathered headdresses and wielding hunting spears.

Guiding journalists on a tour of the exhibition, Chen said: "Now that both sides know each other so well, we can easily point out incorrect details in these artworks, but do such stereotypes and wrong ideas still exist in our perception of each other?"

She added that as the exhibition starts from the Age of Exploration, perhaps visitors can experience not just a journey to discover new continents, but also gain a fresh understanding of the world.