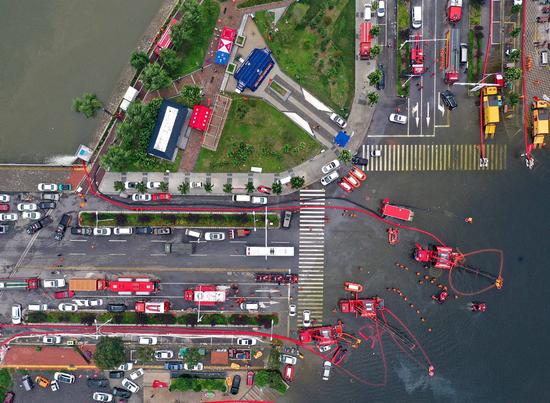 Workers are busy pumping rainwater from a flooded road in Weihui, Henan province, on Tuesday. The city suffered from severe flooding due to the recent extremely heavy rainfall.(LI AN/XINHUA)

China will step up efforts to issue weather warnings and ensure better coordination and implementation of emergency responses as it braces for more extreme weather in August, a flood control chief said on Wednesday.

July and August are the traditional flooding season in China. Since this year's flood started, average precipitation nationwide has been 31.48 centimeters, a drop of 1.1 percent year-on-year.

However, some areas have been hit by torrential rains over a very short period of time. Thirty-three weather stations have logged record daily rainfall and flood control facilities in many places have not handled the pressure well, Zhou Xuewen, secretary-general of the State Flood Control and Drought Relief Headquarters and vice-minister of emergency management, said at a news conference held by the State Council Information Office on Wednesday.

Local authorities must ensure weather warnings are passed on to every individual in their communities. They also need to have detailed plans on how to relocate the people to safe areas and how to take care of them during an emergency situation, Zhou said.

Instances of different departments not coordinating and enforcing emergency response efforts must be avoided.

This year's flood disasters have affected 34.81 million people. A total of 146 people are dead or missing, 72,000 houses have collapsed and direct economic losses are estimated at 123 billion yuan ($19 billion), Zhou said.

Since July 17, floods have affected 15.4 million people in 21 provincial-level regions, leaving 96 people dead or missing. A total of 1.61 million people affected by the disasters have been resettled.

In hardest-hit Henan province, floods had claimed at least 73 lives as of Wednesday. From July 17 to 22, the precipitation in 39 cities in Henan had surpassed half of their local annual rainfall. Ten cities and counties have seen rainfall over a five-day period equivalent to that of an entire year, Zhou said.

Heavy rain is expected in northern and southern China before August, he warned. In mid to late August, heavy downpours might occur in the Beijing-Tianjin-Hebei area, eastern and central areas, the Inner Mongolia autonomous region, and parts of Heilongjiang, Jilin and Liaoning provinces.

Liu Lifeng, an official with the Ministry of Housing and Urban-Rural Development, said at the news conference that drainage systems in densely populated cities have been closely monitored and maintained since the flood season started.