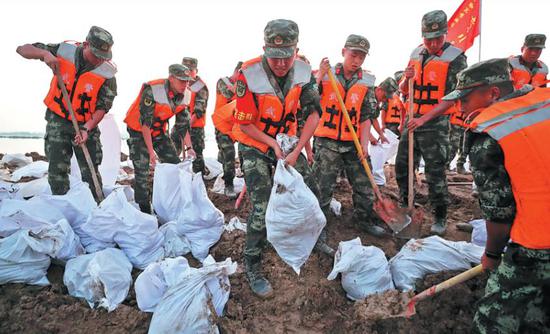 Soldiers from the People's Armed Police Force fortify a dam on Saturday after a local river overflowed due to recent downpours in Xinxiang, Henan province. (WANG JING/CHINA DAILY)

Authorities in Central China's Henan province are racing against the clock to restore normalcy after more than a week of downpours inundated homes, overfilled rivers and reservoirs, killed 63 people and left five missing as of noon on Sunday, a local official said.

The rainstorms have affected nearly 11.45 million residents in 139 counties across the province since July 16, said Li Changxun, deputy head of the province's Department of Emergency Management.

More than 1.31 million residents have been relocated to safe places, he said at a news conference on Sunday afternoon in the provincial capital Zhengzhou, where floodwaters have receded after inundating the subway system and streets last week.

A total of 876,600 hectares of crops have been affected, and hundreds of thousands of houses have collapsed, Li said, adding that repair crews were hurrying to fix bridges, electrical substations and gas pipelines to help return people's lives to normal.

Of the city's 473 major residential communities hit by electricity outages, power has returned to 301 of them and 41 have access to temporary supplies. Four major water supply plants that ground to a halt because of the outages also resumed work, and the gas supply had returned to 99 percent of the pre-disaster level.

"We need to hurry up to check sectors that are prone to flooding, prepare enough flood control materials and fortify the rescue effort so as to brace for the next rainfall," Li said.

In the 24 hours from 7 am on Friday to 7 am on Saturday, torrential rains continued to lash the Henan cities of Luoyang, Pingdingshan, Shangqiu, Kaifeng and Hebi.

The provincial government said six monitoring stations registered precipitation in excess of 50 mm over the period. Several rivers were swollen due to continual rainfall, and 13 large and 44 medium-sized reservoirs in the province saw their water levels exceed the flood season marks.

Zhou Xuewen, secretary-general of the State Flood Control and Drought Relief Headquarters, went to oversee flood control and rescue efforts on the ground in cities of Zhengzhou, Hebi and Anyang on Saturday.

Zhou is also vice-minister of both emergency management and water resources.

The Ministry of Agriculture and Rural Affairs dispatched experts to the rainstorm-hit provinces of Henan and Hebei to mitigate crop losses.

Authorities in Xinxiang, which is a 90-minute drive from Zhengzhou, said 1.71 million, or one-fourth, of its residents were affected by the flood as of Saturday.

On Friday, three military helicopters airlifted 200 packages of bottled water, 50 large boxes of instant noodles and some medical materials to a village in the flood-ravaged city. An aircraft also mapped the village and its surrounding areas to facilitate relief work.

By the end of Saturday, the aircraft had delivered more than 60 metric tons of food, drinking water and medical necessities to 17 badly affected villages in the city's Huixian county. Nearly 20,000 people live in the villages.

As of 4 pm on Saturday, more than 8,800 soldiers from the People's Liberation Army and the People's Armed Police Force, and over 16,000 members of the militia and reserve forces had been deployed in flood relief and reconstruction efforts in more than 10 affected areas in Henan, according to the PLA Central Theater Command. About 840 vehicles and engineering machines, and over 140 boats and three helicopters were dispatched.

The flooding has disrupted the supply of thermal coal in the province. To ease the shortage, railway authorities have asked Shanxi and Shaanxi provinces and other major coal-producing areas to dispatch 60 coal trains to Henan each day.