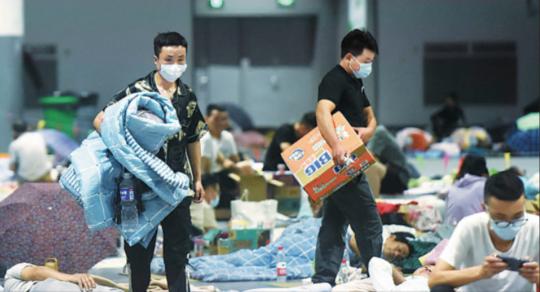 More than 20,000 migrant workers and their family members working for the Hangzhou 2022 Asian Games have been relocated to the Hangzhou International Expo Center in Zhejiang province on Sunday. Typhoon In-Fa made landfall in Zhejiang at noon on Sunday. (LONG WEI/FOR CHINA DAILY)

Typhoon In-Fa, the sixth this year, made landfall in Zhoushan, Zhejiang province, at around 12:30 pm on Sunday, with maximum wind speed reaching 136.8 kilometers per hour.

Moving northwest with gusting winds and heavy downpours, it was expected to make a second landfall between Jiaxing in northern Zhejiang and Shanghai between Sunday evening and early Monday morning, according to the China Meteorological Administration.

Zhejiang had upgraded its emergency response to Level I, the highest level, starting at noon on Saturday, the provincial emergency management department said.

Hangzhou Xiaoshan International Airport canceled all flights in and out of Hangzhou on Sunday, with more expected to be canceled on Monday. Local traffic authorities also closed off or imposed traffic flow restrictions on all expressways in Zhejiang.

Over 1.1 million residents in the province had been relocated to safer places by Saturday night, according to Zhejiang Daily.

"I've never seen such heavy rains in my life," 70-year-old villager Qiu Achun said on Sunday afternoon as she was being relocated to higher land by local firefighters in Keqiao district of Shaoxing, Zhejiang. Shaoxing, in the northern part of the province, was forecast to receive the heaviest rain in Zhejiang, with torrential rains forecast for the next several days.

The typhoon had previously been forecast to make landfall in Taizhou, to the south of Zhoushan.

In explaining why Typhoon In-Fa had swirled farther north than expected, Zhang Yan, deputy director of the Zhejiang Meteorological Station, said the storm was unbalanced and, due to the mutual rotational effect of it and Typhoon Nepartak, which was forming on its tail, the two typhoons were "comparatively weak".

"All these factors have contributed to the northward adjustments to the actual route of In-Fa," she said.

All passenger flights at Shanghai's two airports were canceled on Sunday, a rare move in typhoon control, according to the Shanghai Airport Authority.

In addition, the municipality's subway operator announced that all sections of line running above ground and on elevated tracks had been suspended since Sunday afternoon to ensure safety.

Also since Sunday afternoon, service of all buses crossing bridges over the Huangpu River had been suspended. Large passenger buses and large trucks had been banned from taking the Shanghai Yangtze River Bridge connecting Chongming Island with downtown Shanghai.

The city's meteorological authority said that the core convection zone, the area surrounding the eye of the storm, was expected to reach Shanghai on Sunday night, with rainstorms and high winds possibly continuing until Tuesday.