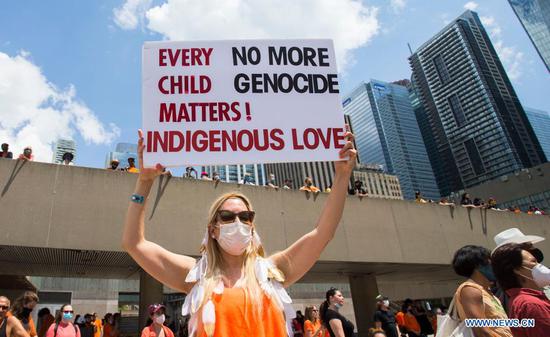 A woman holds a placard during a rally in Toronto, Canada, on July 1, 2021. Hundreds of people gathered here on Thursday to pay tribute to indigenous children whose bodies were found in mass graves near former indigenous residential schools in Canada. (Photo by Zou Zheng/Xinhua)

Canada Day, the country's national holiday on Thursday, was overshadowed by the newly-found remains of 182 people in unmarked graves around a former indigenous residential school near Cranbrook in British Columbia province of Canada a day ago.

Many cities in Canada cancelled Canada Day celebrations and outraged people took to the streets to denounce the cruelty that reminds the country of its savage colonial past, as the discovery came after more than 1,000 unmarked graves had been revealed in recent months.

The finding followed the discovery of an estimated 751 unmarked graves near a site of the Marieval Indian Residential School in Saskatchewan. Less than a month before the finding of the 751 victims, Canada and the international community had been shocked by the remains of 215 people discovered at the site of the Kamloops Indian Residential School in British Columbia.

The Aq'am community, a member of the Ktunaxa Nation located near the city of Cranbrook, used ground-penetrating radar to find the remains of the 182 victims close to the former St. Eugene's Mission School, the Lower Kootenay Band said in a statement on Wednesday.

The indigenous school was operated by the Catholic Church from 1912 until the early 1970s. The building has since been converted into a resort and casino, with an adjacent golf course.

"It is believed that the remains of these 182 souls are from the member Bands of the Ktunaxa Nation, neighboring First Nations communities and the community of Aq'am," the band said in the statement.

The band said up to 100 of its members were forced to attend the school.

According to reports, over 150,000 indigenous children in Canada were forced to leave their families to attend the so-called residential schools, which were known for overcrowding, poor sanitation, unhealthy food and menial labor. Harsh punishment was given to students who spoke their native language or took part in traditional ceremonies.

Prior to the latest finding of the 182 victims, survivors of Canada's indigenous residential schools said the former two findings, which refreshed their feelings of grief and trauma, were just the tip of an iceberg.

In a statement issued after the finding of the 751 unmarked graves, Canadian Prime Minister Justin Trudeau called the two discoveries "a shameful reminder of the systemic racism, discrimination, and injustice that Indigenous peoples have faced and continue to face in this country."

NATIONAL DAY IN SHADOW OF SHAME

Demonstrations and vigils were held in multiple cities in Canada, calling for justice for the indigenous people and the cancellation of Canada Day celebrations.

In Ottawa, the country's capital, thousands of people wearing orange shirts marched with some carrying large banners with slogans like "No pride in genocide," according to local media.

The color orange is a symbol of survivors of Canada's residential school system.

The Canadian flag on the Peace Tower in Ottawa and the flag on the central tower of the Quebec National Assembly were both flown at half-mast to honor indigenous children.

In Toronto, protesters also in orange shirts marched early on Thursday, with many carrying signs with slogans like "Happy denial day," according to local media. Indigenous performer Danielle Migwans also reportedly performed a healing dance during the march.

In his Canada Day message, Trudeau said the findings of the graves of indigenous children at former residential schools "have rightfully pressed us to reflect on our country's historical failures."

"This Canada Day, let's recommit to learning from and listening to each other so we can break down the barriers that divide us, rectify the injustices of our past, and build a more fair and equitable society for everyone," he said.