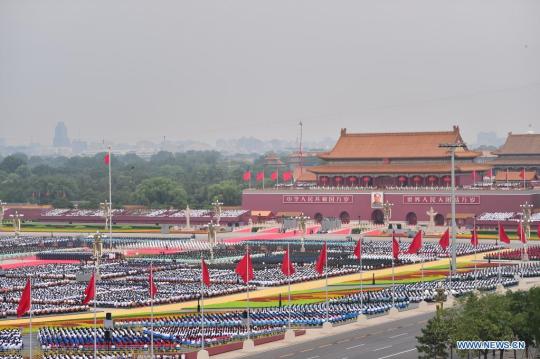 A ceremony marking the centenary of the Communist Party of China (CPC) is held at Tian'anmen Square in Beijing, July 1, 2021. （Photo/Xinhua）

The grand gathering in Tian'anmen Square in Beijing on Thursday morning to celebrate the centenary of the Communist Party of China naturally drew the world's attention.

Those hoping the event would indicate the direction in which the country is heading under the guidance of the CPC will not have been disappointed. In his centerpiece speech, Xi Jinping, general secretary of the CPC Central Committee, China's president and chairman of the Central Military Commission, set out the course ahead in an unequivocal way.

Noting that the Party always represents the fundamental interests of the people, he said it will continue to stay true to its original mission of seeking happiness for the Chinese people and the rejuvenation of the Chinese nation.

Having accomplished its first centenary goal of building a moderately prosperous society in all respects, the Party has fulfilled the solemn promise it made to the Chinese people, and the country is "closer, more confident, and more capable than ever before of making the goal of national rejuvenation a reality".

But this has not come easily. It is the Party's ingrained roots in the people, and its perseverance and adaptability to changing times that have secured for the country the more developed institutional guarantee and more solid material foundation it enjoys as it strives to realize the second centenary goal of becoming a great modern socialist country that is prosperous, strong, democratic, culturally advanced, harmonious and beautiful by 2049, the 100th anniversary of the founding of the People's Republic of China.

Xi's speech clearly showed that the Party, well aware of the costs the Chinese people have paid over the past 100 years to realize the first centenary goal, will not let grass grow under its feet and take a moment to rest on its laurels. It has wasted no time in setting foot on the path to attain the second goal.

In saying so, Xi also offered insight into why the Party is always able to self-adjust, and why it can grow from being a small political organization of over 50 members when it was founded to be the largest governing party in the world, with more than 95 million members.

Confidence was a key word in his speech; and he declared that national rejuvenation has become a "historical inevitability". In doing so, he sent a clear-cut message to those trying to sow discord between the Party and the people that their attempts are doomed to failure.

To some extent, it is such attempts that have spurred the Party to constantly improve itself, and to make sure its policies and actions remain in line with the interests of the people and the trends of the times.

In stressing that the Chinese nation has achieved the tremendous transformation from standing up and growing prosperous to becoming strong, he made it clear that it will never allow any external powers to bully, oppress, or subjugate it. Whoever tries that will collide with a great wall of steel forged by over 1.4 billion Chinese people.

But while the country will resolutely defend its development interests, it is not in the nation's culture and history for it to bully, oppress or subjugate. The tremendous sufferings the country has endured have made it an ethical and behavioral code for the Party and the people that China should do unto others as it would have done unto itself.

That is why Xi once again assured like-minded countries of China's reliability as a partner for safeguarding world peace, contributing to global development and preserving international order.

He left no doubt that under the leadership of the CPC, China is a firm supporter of multilateralism, openness and justice, and that the country has no desire for hegemony.