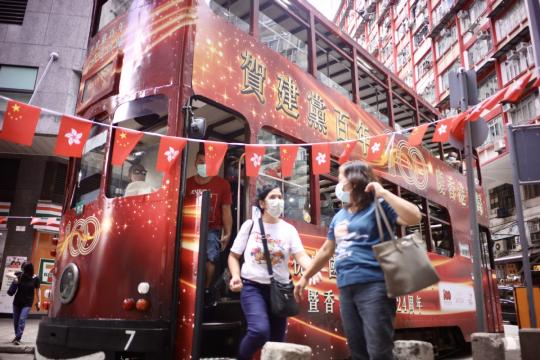 People in Hong Kong get off a tram on Thursday. The tram has a slogan marking the 100th anniversary of the founding of the Communist Party of China and the 24th anniversary of Hong Kong's return to the motherland. （Photo by Edmond Tang/China Daily）

Xi Jinping, general secretary of the Communist Party of China Central Committee, emphasized on Thursday the central government's overall jurisdiction over Hong Kong and Macao and the importance of implementing the legal systems and enforcement mechanisms for the two special administrative regions to safeguard national security.

Xi, who is also Chinese president and chairman of the Central Military Commission, made the remarks in his speech at a ceremony marking the centenary of the CPC in Beijing.

"We will stay true to the letter and spirit of the principle of 'one country, two systems', under which the people of Hong Kong administer Hong Kong, and the people of Macao administer Macao, both with a high degree of autonomy," he said.

The central government, while protecting China's sovereignty, security and development interests, will also strive to ensure the social stability and long-term prosperity of the two regions, Xi added.

Responding on Thursday to Xi's speech, dignitaries from across wide sectors of the Hong Kong and Macao communities hailed the speech, saying it shed light on the bright future of the nation and the special administrative regions and inspired them to continue to safeguard national security.

Lawmaker Jeffrey Lam Kin-fung, who attended the ceremony in Beijing, said he was honored to attend and excited to witness the event.

He said Xi's speech shows the central government's care for Hong Kong and its steadfast support for "one country, two systems", adding that Hong Kong should cherish its hard-earned stability and future prospects.

He called for all-around efforts by various sectors of Hong Kong to safeguard national sovereignty, security and development interests and continue to capitalize on the city's strengths to serve the country's needs.

After listening to Xi's speech in Beijing, Executive Council member Regina Ip Lau Suk-yee and Starry Lee Wai-king, chairwoman of the city's biggest political party, the Democratic Alliance for the Betterment and Progress of Hong Kong, expressed confidence in the city's bright future.

They were among the more than 70 people in a delegation from Hong Kong, led by Hong Kong SAR Chief Executive Carrie Lam Cheng Yuet-ngor, to visit Beijing.

In Macao, many organizations held gatherings for their members to watch the ceremony and listen to Xi's speech.

U Kin-cho, vice-president of the board of directors of the Macao Chamber of Commerce, who watched the ceremony with members of several groups in Macao, said Xi's remarks have further motivated the chamber to firmly uphold the leadership of the CPC and safeguard the nation's sovereignty, security and development interests.

A festive spirit permeated the special administrative regions, with bunting of national and regional flags hung on building facades and between lampposts. Many schools and organizations held flag-raising ceremonies to honor the special occasion.

In Hong Kong, free rides were offered on trams draped in red.

More than 600 officials and community leaders attended an opening ceremony in Hong Kong to mark the launch of a series of celebrations for the special occasion.