Man-mocking comedian accused of being 'sexist,' but who is the joke on? 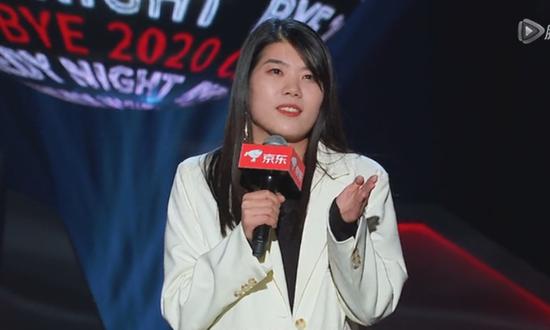 "It is all funny until the joke is about them." Yang Li, a Chinese stand-up comedian who caught her big break this year for sarcastic attacks on men during online gigs, has found herself in a tornado of online trolls and even a formal report to the state cultural publication regulator, which ironically accuses Yang of being "sexist" herself.

"They look so mediocre, yet they manage to be so confident," Yang said, in mocking the unearned picky attitude of men in relationships during a gig on the show, winning agreement and applause from other women and some 1.2 million followers on Sina Weibo.

She went further down the path in a recent gig on Friday, saying that "men are garbage" and "men do not have a bottom line."

Yang's performance on Friday was accused of "being sexist, promoting hatred against all men, inciting bad blood among the public, and creating gender opposition," as per a screenshot of a report to the National Radio and Television Administration that is available online. Discussions under the #Yanglibeingreported had gathered more than 470 million readings and more than 125,000 comments on Sina Weibo as of press time.

Yang, a former scriptwriter from Shanghai, joined the funny business in 2018 and established quite a character in Tencent's popular internet stand-up comedy show Rock and Roast, with the image of an outspoken young neighborhood girl caught in confusion over friendship and relationships, with men in particular.

Chi Zi, another Chinese stand-up comedian, commented on Yang's controversial style on social media on Saturday, saying that "people often ask me what a real talk show is like… It is certainly not what Yang Li is offering."

Some angry viewers went on social platforms such as Douyin, saying that "what Yang was trying to say is that all men including your fathers, sons and brothers, they are all garbage, and is that funny?"

Disagreeing, Joe Wong, a Chinese-American comedian who gained fame on the Chinese internet for telling jokes about then US president Barack Obama in 2010 at the 66th Annual Radio and Television Correspondents' Dinner, wrote that "What Yang Li did was a genuine talk show. She is the one worth most attention this year in China."

She mocked men from a perspective that is strange to them, and that may explain why her jokes were not accepted by all, Wong said.

"The essence of a talk show is offering a chance for the disadvantaged to mock the advantaged. It is not a big deal for Yang to joke about men, who are dominant in society. She was not pointing fingers at every man, but those who really have no bottom lines and act on guilty consciences," noted Wong.

Yao Chen, a famous Chinese actress followed by some 85 million fans on Sina Weibo, also voiced support for Yang, commenting that "every time such an offensive voice [like Yang's jokes] is gradually accepted, there is one more possibility in the world that is about life and humanity."

Many netizens commented that "we are dudes, and we do not take any offense from Yang Li."

"Yeah, it is all funny until the joke is about them. Then all of a sudden, they're not laughing. And that is sad," one wrote.

Chinese pop culture has apparently included more female perspectives this year. Apart from Yang's daring mockery of the dominant status of men in relationships despite online protests, Tan Weiwei, a pop singer, released in early December a song named by a typical Chinese woman called Xiaojuan, in efforts to spotlight the pain of women suffering from domestic violence.

"Our names are not really Xiaojuan, an alias is our last line of defense," read the lyrics, in an apparent oblique reference to domestic violence.