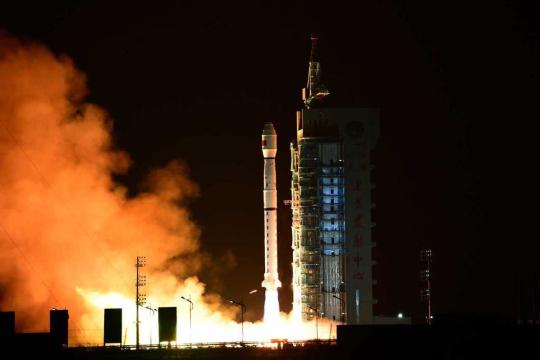 China launched a Long March 4C carrier rocket late on Sunday, bringing an end to its annual space plan for 2020.

The 48-meter rocket lifted off at 11:44 pm at the Jiuquan Satellite Launch Center in the northwestern Gobi Desert, deploying the Yaogan 33 remote-sensing satellite and a small experimental satellite into a sun-synchronous orbit, according to a statement from China Aerospace Science and Technology Corp, the nation's leading space contractor.

This was the 357th launch of the Long March rocket family.

Yaogan 33 is tasked with scientific experiments and marine and land resources surveys, the State-owned conglomerate said, noting that the mission marked the completion of China's annual space schedule.

In 2020, China launched a total of 39 carrier rockets, and four of them failed to transport their payloads into space.

In 2021, China's most significant space flights will all involve the nation's manned space station program, which is scheduled to initiate construction in the coming months.

The first important launch is set to take place in the first half of 2021 to deploy the core module of the country's first space station, according to the China Manned Space Agency.

Information from the agency shows that the module, Tianhe, or Harmony of Heavens, will have three parts－a connecting section, a life-support and control section and a resources section. It will be equipped with three docking hatches reserved for visiting manned or cargo spacecraft, and two berthing locations used to connect with space laboratories. There will also be a hatch for astronauts' extravehicular activities.

The module will be 16.6 meters long with a diameter of 4.2 meters. It will be central to the space station's operations, given that astronauts will live there and control the entire station from inside it. The module will also be capable of hosting scientific experiments.

After this launch, astronauts in the Shenzhou XII and XIII missions and two cargo ships will be lofted within several months to prepare the module for its future docking with other parts of the station.

Missions for next 2 years

In the next two years, a total of 11 Long March 5B, Long March 7 and Long March 2F missions will put the station's major components into orbit and shuttle astronauts there to assemble the space-based facility.

The multimodule station, named Tiangong or Heavenly Palace, will be mainly composed of three components－a core module attached to two space labs－having a combined weight of more than 90 tons.

The space station is expected to become fully operational around 2022 and is set to operate for about 15 years, program planners have said.