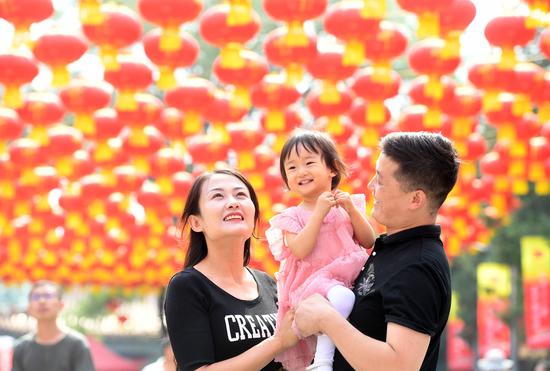 China ranked third in the latest global poll on people's perceptions of their personal security by a pollster from the United States, indicating its residents have a high sense of security.

The 2020 Global Law and Order report, released on Tuesday by the Washington-based organization Gallup, covered 144 countries and areas. The poll was conducted throughout 2019 and involved nearly 175,000 people aged 15 and older who were interviewed face-to-face or by telephone.

The higher the score, the higher the percentage of the population who felt secure. China's overall law and order index is 94. Singapore and Turkmenistan topped the poll with scores of 97.

Participants were asked four questions: Do you have confidence in the local police force? Do you feel safe walking alone at night in the city where you live? Within the last 12 months, have you had money or property stolen from you or another household member? Have you been assaulted or mugged?

The report showed that 90 percent of the respondents from China said they feel secure when walking alone at night, which is 21 percentage points higher than the average response. China ranked fifth in the index of countries where people feel safest walking alone, after Singapore, Turkmenistan, Norway and the United Arab Emirates.

To maintain social prosperity and stability and enhance people's sense of gain, happiness and security, the Central Committee of the Communist Party of China and the State Council launched a three-year campaign against organized crime in 2018.

By the end of August, 3,347 mafia-style organizations and 10,564 other criminal gangs had been busted nationwide, according to the national office against organized crimes.

Serious violent crimes have been on the decline for 10 years, according to the report.

According to the Ministry of Public Security, the number of crimes involving guns and explosions in China dropped 50 percent in 2019 compared with the previous year. The ministry also launched a three-year campaign in May to combat such crimes.