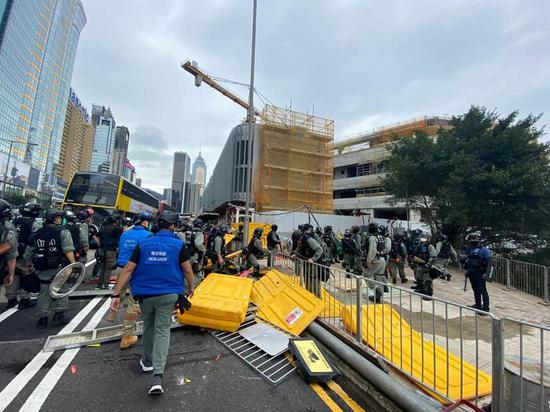 Starting from Sunday noon, rioters gathered in Causeway Bay and Wan Chai areas and blocked main roads with rubbish bins, bamboo sticks, rocks and other objects. Some of them dashed onto nearby flyovers and roads, forcing cars to stop.

At a flyover in Causeway Bay, rioters hurled a large amount of stones, hard objects and unknown fluid at police officers. At least four media liaison officers on duty were injured.

In Tin Lok Lane near the flyover, rioters hit police vehicles with bricks and smashed the windshield of one car, injuring one police officer.

A 41-year-old man was confronted by dozens of rioters who had been building barricades with rubbish and was assaulted by several of them with umbrellas. As the victim tried to escape, the rioters gave chase and continued their attack. At least five rioters opened their umbrellas to cover up their assault.

The victim sustained lacerations to his head, hand and back and has been hospitalized.

Identifying the victim as a lawyer, President of the Law Society of Hong Kong Melissa Kaye Pang said her organization felt sad and furious about the incident and strongly condemned the rioters' acts.

An online video showed a woman who was removing road barricades built by rioters was knocked to the ground, surrounded and beaten up by several rioters with long sticks.

The police strongly condemned the violent attacks on civilians and police officers, pledging to bring the criminals to justice.

"Rioters have launched intentional attacks on police officers and civilians. Such despicable and ruthless acts are not to be condoned," the police said.

Up to 9:30 p.m. local time, at least 180 people had been arrested, mainly for offenses like participating in unauthorized assembly, unlawful assembly and disorderly conduct in a public place.

As the unlawful assemblies continued, some rioters set fire to debris and allegedly threw glass bottles onto the ground from the rooftop of a building, posing a threat to public safety.

Multiple sets of traffic lights have been damaged while carriageways have been covered in debris. Some shops in Causeway Bay were vandalized by rioters who used bricks and other hard objects to smash glass panes into pieces.

In the evening, the protesters gathering inside the Harbour City, Tsim Sha Tsui behaved in a disorderly manner, causing disruption to the public peace.

The police pointed out that these atrocious acts in breach of the law are not to be condoned by any civilized society.

"Officers will spare no effort in the investigation and offenders must bear the legal consequences. All members of society are urged to renounce violence and restore peaceful and rational means of expression, a core value that Hong Kong people always take pride in," the police said in a press release.