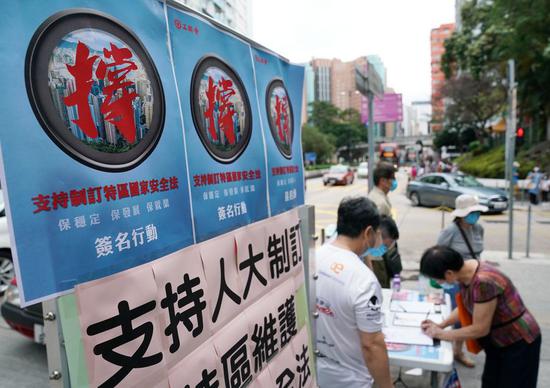 A resident signs in a street campaign in support of national security legislation for Hong Kong Special Administrative Region in Hong Kong, China, May 23, 2020. (Xinhua/Li Gang)

Officials of the Hong Kong Special Administrative Region (HKSAR) government said on Sunday that safeguarding national security is a common responsibility that bears on the vital interests of all Hong Kong residents.

A draft decision on establishing and improving the legal system and enforcement mechanisms for the HKSAR to safeguard national security was submitted to the third session of the 13th National People's Congress (NPC) for deliberation on Friday.

In different articles published in their official blogs, the HKSAR government's chief secretary for administration, secretary for justice, financial secretary and secretary for security expressed support for the national legislature's deliberation on national security legislation for the HKSAR.

Chief Secretary for Administration Matthew Cheung said the NPC's decision is legal and constitutional and is out of both necessity and urgency.

Acts deliberately challenging the bottom line of "one country" and endangering national security have been seen in Hong Kong over the past year, Cheung noted, adding that some people openly advocated "Hong Kong independence" and "democratic self-determination", incited illegal activities and committed acts close to terrorism.

There are even acts of wantonly insulting and burning the national flag, defacing the national emblem, attacking the central government's offices in Hong Kong, begging foreign countries to interfere in Hong Kong's affairs, and threatening to paralyze the HKSAR government, he said. "These acts are extremely worrying."

Cheung said the HKSAR government will fully cooperate with the NPC Standing Committee to complete the legislation as soon as possible, so as to fulfill its responsibility of safeguarding national security and ensure the long-term prosperity and stability of Hong Kong under "one country, two systems".

Secretary for Justice Teresa Cheng noted in an online article that the decision on national security legislation for Hong Kong is to be made in accordance with Article 31 and Article 62 of the Constitution and the relevant provisions of the Basic Law.

There are doubts as to whether the Standing Committee of NPC can legislate national security laws for the HKSAR. Such doubts are totally unwarranted, Cheng said.

She pointed out that national security is never part of HKSAR's autonomy, but a matter that affects 1.4 billion Chinese people and is entirely within the purview of the central authorities.

The four areas to be covered in this national law are secession, subversion, terrorist activities endangering national security and interference by foreign political forces, Cheng noted. "These are core national security matters of any state."

"When there is no country, there is no home. These are basic principles that any right minded person will agree. To blindly vilify laws relating to national security is totally irrational," she said. "It is high time we grapple and address the need to legislate to protect national security and as the HKSAR cannot do it, it is not surprising that the NPC takes action at the national level."

Financial Secretary Paul Chan said the legislation will help maintain social stability and a sound business and investment environment in Hong Kong, and stressed that Hong Kong's status as a global financial hub will not continue if it becomes a loophole in national security.

It is the violent incidents, social unrest and emerging "Hong Kong independence" forces since last year that make local and foreign investors worry about the risk of political and social stability in Hong Kong, Chan said.

Other global financial centers also have their own national security laws and their growth momentum is not affected, Chan said.

Secretary for Security John Lee warned that the government may raise the assessment level of threats of terrorist attacks as the home-grown terrorism is emerging in Hong Kong, citing that there have been more than 10 cases related to explosives and other hazardous articles since last year.

Police seized explosives, nails, a pressure cooker that can be used as the explosive container, and chemicals suspected to be stolen from a college lab at a wasted school campus earlier this month. Various types of bombs and guns that are frequently used in terrorist attacks in foreign countries have been found in Hong Kong.

Given the worsening situation, police will likely step up response measures, such as putting areas of high risk in lockdown, carry out more patrols, and examine personal belongings on the street, Lee said.

To prevent and contain terrorist activities will help Hong Kong remain as a safe and stable city, and protect safety and property of residents, Lee said.