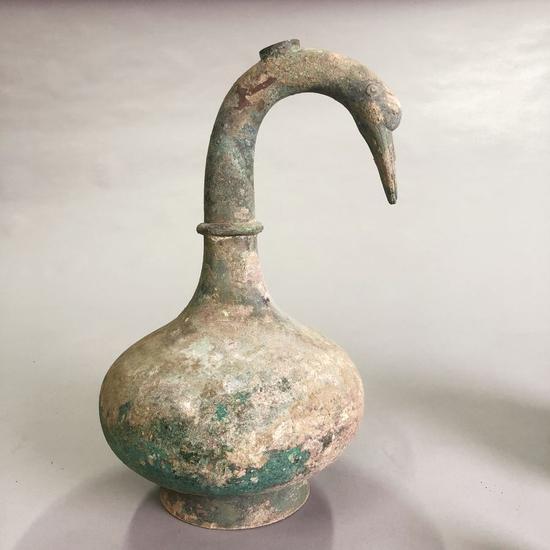 Photo taken on May 22, 2020 shows a 2,000-year-old bronze pot with a curved neck in the shape of a swan. The pot, freshly unearthed in central China's Henan Province, contains more than 3,000 ml of unknown liquid. (Xinhua/Li Lijing)

Archaeologists discovered the pot with a curved neck in the shape of a swan in a tomb in the city of Sanmenxia. Also unearthed from the tomb included a bronze helmet, a bronze basin and swords made of iron and jade.

The unknown liquid in the pot was yellowish-brown in color with impurities. The sample was sent to Beijing for further tests.

Preliminary judgment based on the form of the tomb indicates the tomb was built at the turn of the Qin Dynasty (221 BC-207 BC) and the Han Dynasty (202 BC-AD 220). Its owner might be a low-ranking official with a title.

The bronze pot was excavated from an ancient tomb when the archaeologists were examining the site of a local shantytown renovation project, said Zhu Xiaodong, deputy head of Sanmenxia's institute of cultural relics and archaeology.

This was also the first bronze pot of its kind ever discovered in Sanmenxia, according to Zhu.

The archaeologists invited a senior veterinarian to help identify the shape as of a swan.

"The design resembles that of a mute swan," said Gao Ruyi, a senior veterinarian with the Sanmenxia wetland park, adding that the beak of a swan is longer than that of a goose, which has been degenerated as a result of being fed by human beings.

Archaeologists speculated that the ancient craftsmen may have observed swans closely to create the pot in such a realistic shape.

"We can boldly estimate that swans may have appeared in Sanmenxia during the late Qin and early Han dynasties," said Zhu.

Sanmenxia has been receiving swans from Siberia in winter since the 1980s. Local people are fond of the graceful birds and feed them voluntarily.

Located between Xi'an and Luoyang, two ancient capitals in Chinese history, Sanmenxia used to serve as a military and traffic artery. As a result, the city is rich in historical relics.