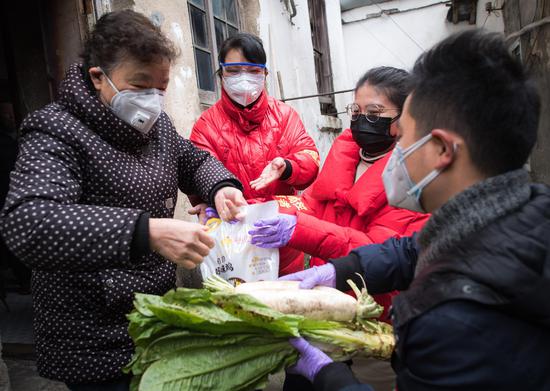 After putting on a red uniform and a face mask at 8 a.m., Huang Juan gets ready to conduct a daily quarantine check on 400 households and shops in her community in Nanning, capital of south China's Guangxi Zhuang Autonomous Region.

For the past few weeks, she has done this each and every day. The necessary routine designed to curb the spread of the novel coronavirus disease (COVID-19) was so arduous that Huang remained atop the cellphone pedometer app she used.

Among her everyday items are a "resident roster" on which she has logged the health condition of every household. Now, she has memorized most of the information.

ALL OUT ON A HERCULEAN TASK

Guangxi has more than 80,000 grid-based community workers like Huang. Millions more safeguard a total of 650,000 urban and rural communities across China. Since the outbreak, they have done their utmost to keep the virus out of their "territories."

Grid-based management of populated communities and neighborhoods "is like dividing a big cabinet into small grids and placing objects in order, so you are no longer clueless. Whenever you need to check or sort out anything, it's easy to do," said Chen Wenjun, a senior official of Liuzhaizi Village in Liaoning, a province some 3,000 km northeast of Guangxi.

As to Anhui, an inland province, all the villages and residential communities of 16 cities in the province have adopted closed-off management since Feb. 7 under a series of thorough and strict measures, where grid-based community workers had to multitask between "gatekeepers," "publicists" and "stewards," said Meng Kai, a 32-year-old grid-based worker in the city of Bengbu.

Meng said that he could not recall how many times he had climbed up and down to bring in food, take out the garbage and offer psychological advice, noting that on the busiest day, he climbed more than 100 flights of stairs.

Wuhan, the epicenter of the epidemic, has some 13,000 grids and 8,700 grid-based community workers. Each worker takes care of 300 to 500 households, according to Luo Ping, deputy secretary of the Commission for Political and Legal Affairs of the Communist Party of China Municipal Committee of Wuhan.

Grid-based management in Wuhan has been running at full speed since Feb. 11, when the city's headquarters for epidemic prevention and control required all residential areas to implement closed-off management.

"Grid staff are versatile," said Hua Qing, head of a local community affairs committee on Hanxing Street of Jianghan District, Wuhan, who also served as an ordinary grid-based community worker. "We are not only community workers, but also purchasing agents, delivery workers, barefoot doctors and psychologists."

Grid workers in Hua's community would queue at the hospital around midnight to buy drugs for their residents who were in urgent need.

"Since the community was closed off, we have completed 164 orders for those who suffer from diseases like cancer, diabetes, hypertension and heart attacks," Hua said.

Many foreigners have volunteered to join the grid-based campaign.

"The hard work Chinese grassroots workers have paid are unforgettable. Their assistance reach into seemingly trivial matters, and they never complained," said Thomas Deshors, a French national who has helped deliver batches of face masks to several communities in Chengdu, capital of southwest China's Sichuan Province.

A multilingual service team has also been formed in the city of Wuxi, east China's Jiangsu Province, consisting of eight police officers and grid-based workers who provided consulting services for English, German and French speakers.

The internet has also played an important role in the prevention and control of the epidemic as China's internet infrastructure construction speeds up.

"Grid-based workers have built the first line of defense against the virus," said Luo Ping, the Party official from the city of Wuhan.

There have been no newly confirmed coronavirus cases reported in Hua Qing's community on Hanxing Street of Jianghan District, Wuhan, for a week.

"It was hard, but we made it, and I'm grateful," Hua said, adding that more and more patients have been discharged from hospital after recovery.

Zhang Chao is a grid-based worker of the post-90s generation working from Zhengzhou, capital of central China's Henan province, who found dealing with non-cooperative residents quite challenging. In this case, he would patiently communicate with them and strive for mutual understanding.

"We had contacts with many people every day, sometimes we worry about infection. But only when we do our job well can the efforts of epidemic control be advanced," Zhang said.

Meng Tianyuan, an urban management worker in Nanjing, capital of Jiangsu Province, recently had a busy day working together with grid-based workers, whom he would prefer to consider as "net weavers."

Their work is like thousands of threads woven into a net, firmly protecting the residents in communities, Meng said. "They may not be as professional as medical staff at the frontline, but they are great and respectable."

"No winter lasts forever, and no spring skips its turn. I believe that with the joint efforts of the whole nation, the epidemic will eventually pass," Meng said.