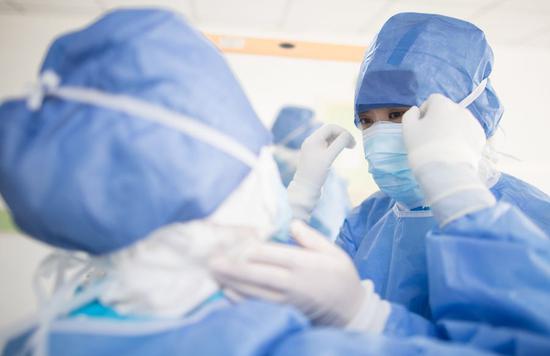 Chinese authorities Monday stressed precise and differentiated strategies in the prevention and control of the novel coronavirus epidemic.

Measures should be taken based on different conditions in each region to combat the epidemic, according to a meeting of the leading group of the Communist Party of China (CPC) Central Committee on the prevention and control of the novel coronavirus outbreak, which was chaired by Premier Li Keqiang, also a member of the Standing Committee of the Political Bureau of the CPC Central Committee and head of the leading group.

The meeting stressed unremitting efforts in various prevention and control work and the orderly resumption of work and production.

Efforts should be made to achieve the goals and tasks for economic and social development this year, according to the meeting.

The meeting heard reports on Wuhan's epidemic prevention and control made by a central government team and Hubei province, learned about the needs on the frontline and made arrangements to step up support for the region.

The meeting urged Wuhan to increase its abilities to receive patients, lower infection rates, reduce mortalities and prevent mild cases from developing into severe ones.

It also stressed the protection of medical workers, timely release of information and better communication with the public.

Medical supplies to Hubei, Wuhan in particular, and daily necessities of the local people will be ensured, and financial support from the central fiscal will be increased, the meeting said.

Various localities should take precise measures to prevent and control the epidemic and coordinate the work with economic and social development, the meeting said, noting that the protection plans for key population groups, venues and units should be improved and thoroughly carried out.

Wang Huning, also a member of the Standing Committee of the Political Bureau of the CPC Central Committee and deputy head of the leading group, attended the meeting.