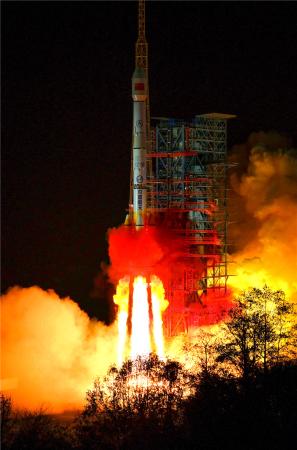 A Long March 3B carrier rocket lifts an experimental communication satellite into space at 11:20 pm on Tuesday at the Xichang Satellite Launch Center in Sichuan province. (Photo by Guo Wenbin/For China Daily)

Construction of China's Beidou Navigation Satellite System will be finished in May through the deployment of the last third-generation Beidou satellite, according to the China Satellite Navigation Office.

The office said in a statement sent to China Daily on Monday that it will conduct two Long March 3B carrier rocket launches, one in March and the other in May, at the Xichang Satellite Launch Center in Sichuan province to send the last two third-generation Beidou satellites into geostationary orbit.

The rocket to be launched in March was transported to the Xichang center on Feb 14 and is undergoing final inspections, the statement said, adding that about 200 engineers and technicians are working on the coming mission at the launch center. The satellite had arrived sometime earlier.

The most recent deployment for Beidou's space-based assets took place in December, when the 56th and 57th Beidou satellites were lifted into space atop a Long March 3B at the Xichang center.

They are now operating in medium Earth orbits about 20,000 kilometers above the ground, together with another 22 satellites of the same type previously launched. Their deployment marked the completion of Beidou's core in-orbit network, according to the office.

Beidou is China's biggest space-based system and is one of the four global navigation networks along with the United States' GPS, Russia's GLONASS and the European Union's Galileo.

Since 2000, when the first Beidou satellite entered orbit, 57 satellites－including four experimental ones－have been launched, and some of them have retired. Beidou began providing positioning, navigation, timing and messaging services to civilian users in China and other parts of the Asia-Pacific region in December 2012. At the end of 2018, Beidou started to provide global services.

The China Satellite Navigation Office also noted that Beidou has been playing a helpful role in the fight against the ongoing novel coronavirus outbreak in the nation.

More than 6 million cars, taxis, buses and trucks equipped with Beidou terminals receive information about recommended routes sent by the Ministry of Transport on a daily basis. Their users can also check the routes already traveled over the past two weeks.

China Post has also installed Beidou terminals in about 5,000 transport vehicles, which are used for carrying counter-epidemic supplies, to monitor and arrange their routes to make sure the supplies could be sent to users as quickly as possible, according to the China Satellite Navigation Office.