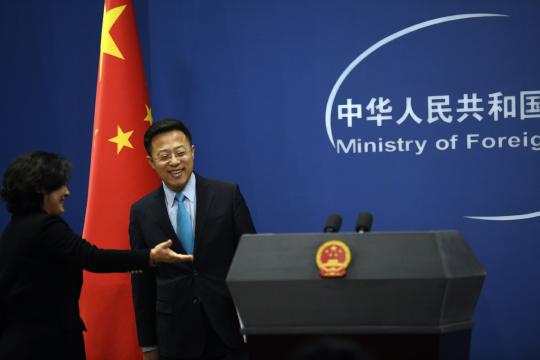 China will not be a "silent lamb "in the face of vicious insults and defamation, and The Wall Street Journal should apologize for a racist headline on an opinion piece, Foreign Ministry spokesman Zhao Lijian said on Monday.

Zhao, who made his debut as the ministry's spokesman, made the remark at its first offline daily news conference since the Spring Festival.

The ministry had held online news conferences for three consecutive weeks due to the novel coronavirus pneumonia outbreak.

Zhao's comment came after reports said that 53 of the newspaper's employees in China signed an email that was sent to its chiefs on Thursday, urging them to consider correcting the headline and apologizing.

China said it had revoked the press credentials of three Beijing-based journalists of The Wall Street Journal due to the racist language used by the newspaper.

Zhao said The Wall Street Journal "has been repeatedly fudging the issue and dodging its responsibility, using the excuse that its news and opinion sections are independent from each other".

"Since it was arrogant enough to do the name calling, why doesn't The Wall Street Journal have the courage to apologize?" he said, adding that China is not interested in the structural division within the newspaper, and that it should face the consequences of its behavior.

The newspaper's opinion piece has aroused anger among the Chinese people and has been widely condemned by the international community, but it has yet to make an official apology, Zhao said.

"China reserves the right to take further steps," he said.

In another development on Monday, the Ministry of Culture and Tourism strongly urged Chinese people not to travel to the U.S.

Given the excessive measures the U.S. has taken to prevent the novel coronavirus and the U.S.' domestic security situation, Chinese tourists in the U.S. have repeatedly faced unfair treatment lately, the ministry said in a statement.